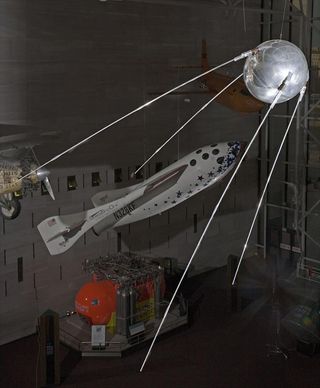 This week, organizations across theglobe celebrate the 11thannual World Space Week, which highlights the contributions of spacescienceand technology to life on Earth.

World Space Week is held every yearfrom Oct. 4-10, withcoordinated events taking place around the world. It's the largestannualpublic space event in the world, according to the event's planners. [Timeline:50 Years of Spaceflight.]

This year's theme is "Mysteries ofthe Cosmos,"and activities include a Google Lunar X Prize Summit on the Isle ofMan, anastronomy festival in Marrakech, Morocco, and a star camp for highschoolstudents in Jeddah, Saudi Arabia.

The United Nations established WorldSpace Week in 1999, andthe event was first held a year later. The U.N. continues to helpcoordinatethe annual celebration, according to the World Space Week Association.

World Space Week's start and enddates are the same everyyear. They mark two key events in the history of space exploration: theOct. 4,1957 launchofSputnik,  and the date  the Outer SpaceTreaty went into effect on Oct. 10,1967. The Treaty formed the basis for international space law.

Last year, when World Space Week'stheme was "Space forEducation," 713 events were held in 55 nations, according to officials.President Obama joined in, throwingastar party for middle-school students on the White House lawn.

Other activities scheduled for thisyear:

This is a busy week for astronomyevents, and not all ofthem are formally connected to World Space Week. The AmericanAstronomicalSociety's Division for Planetary Sciences, for example, is holding itsannualmeeting Oct. 3-8 in Pasadena, Calif.