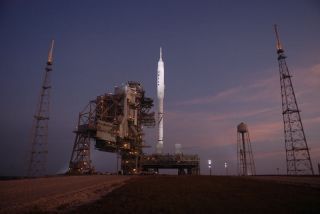 CAPECANAVERAL, Fla.? NASA did not violatefederal law or congressional guidance by taking actions that wouldprematurelykill the Constellation program, according to a legal opinion releasedMonday bythe government's watchdog agency.

Theyalso said NASA wasn't wrong to ask contractors toset aside nearly $1 billion to cover the cost of terminating contracts,buttook no position on whether past contracts had established differentexpectations. [NASA'sNew Direction: FAQ]

Theletter announced a new set of priorities for thefiscal year ending Sept. 30, giving "low priority" to projects thatcould only be used by Constellation.

"Wewere doing the things we needed to do to staywithin appropriations law and believe the GAO opinion supports ouractions," said Bob Jacobs, a NASA spokesman.

U.S.Rep. Bill Posey, R-Rockledge, said Monday that"while NASA may have complied with the letter of the law they certainlyfailed to follow the spirit of the law."

Despitecontroversy over the letter, it has not had amajor impact. Work continues on the Ares I rocket and the Orionspacecraft.

PendingNASA legislation in the House and Senate wouldpreserve some key Constellation elements in a restructured humanspaceflight program.