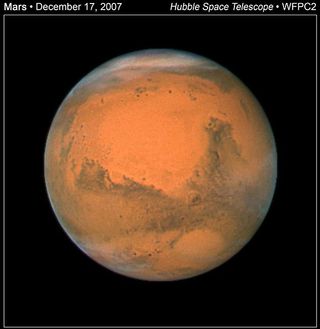 Despite recent media reports that NASA found evidence forlife on Mars, the U.S. space agency says proof that we are not alone is still aways off.

A Wednesday article in the U.K.'s "The Sun"newspaper entitled, "NASA: Evidence of Life on Mars," reported thatthey agency had unveiled "compelling evidence" for Martianorganisms. But NASA officials and veteran Mars mission scientists say"no."

"This headline is extremely misleading," said DwayneBrown, a spokesman for NASA based at the agency's headquarters in Washington,D.C. "This makes it sound like we announced that we found life on Mars,and that is absolutely, positively false."

The piece claimed that the MarsExploration Rovers Spirit and Opportunity, which have been wheeling aroundthe surface of the red planet since January 2004, found pond scum, which thepaper calls "the building blocks of life as we know it."

"I think they have taken this stuff out ofcontext," Brown said.

Such a discovery would truly have been groundbreaking, sincepond scum, scientifically known as cyanobacteria, are actually a form of lifethemselves, not just building blocks for it.

"I can only assume that the Sun reportermisunderstood," said Cornell University planetary scientist Steve Squyres,principal investigator of the Mars Exploration Rover project, who was quoted inthe story. "What Spirit and Opportunity have found is sulfate minerals...not organic materials, not pond scum, and not the building blocks of life as weknow it.

The article, which has been widely quoted across the Web,appeared after NASA scientists spoke to reporters from an astrobiologyconference celebrating the 50th anniversary of research aimed toward searchingfor lifebeyond Earth.

The piece claims, "The recent missions have gatheredevidence of sulphates on Mars, a strong indication there is water on the planetand therefore life."

But just because there might be water does not mean thatlife follows.

"Evidence of water does NOT mean that there waslife," Squyres wrote in an e-mail. "We believe that water isnecessary for life, but not that it is sufficient to assure life. The"...and therefore life" part of the statement therefore is simplywrong."

While scientists have not yet discovered proof of livingthings anywhere in the universe beyond Earth, they are getting closer toknowing where to look and how to recognize the signs of life if they arepresent.

And Brown said that NASA's various Mars missions, includingthe rovers and spacecraft such as the Mars Reconnaissance Orbiter and the 2001Mars Odyssey ? both currently in orbit around the red planet ? are revealing awealth of clues about the possibility of life there. It's just too soon to knowfor certain.

Claims of finding life on Mars are not new.

In August 1996 NASA researchers presented a Martian rockthat they said showed clear signs of being affected by life. The rock, whichhad landed in Antarctica, contained holes and markings that appeared to havebeen formed by bacterial colonies living on it.

The announcement made a huge splash, but in the decade thatfollowed, most researchers have dismissed the claims of life, and foundnon-living explanations for the rock's markings.

There has likewise been controversy over pronouncements thatMars could not possibly harbor life. In 1976, NASA's Viking 1 and 2 landerstouched down on the Martian surface and performed three separate experiments tosearch for signs of life. Despite having sensitivities to detect organicmolecules of a few parts per billion, no organic compounds were ever detectedby either lander. Many scientists declared that Mars therefore must not havemicrobial organisms on its surface.

Yet a morerecent study found that perhaps the Viking experiments were not sosensitive after all, and cast doubt on the conclusion that microbes aren'tthere.

Besides Mars, some particularly promising spots in the solarsystem include the Saturnianmoons Titan ? with its lakes of methane and ethane ? and Enceladus, withits plumes of water vapor, and Jupiter's moon Europa, which is thought toharbor an underground ocean.