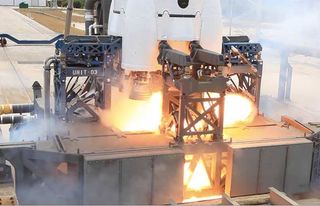 SpaceX performed the first static fire for the Falcon 9 launch vehicle, an attempt that was aborted on spin start.
(Image: © SpaceX)

"Today SpaceXperformed our first Static Fire for the Falcon 9 launch vehicle. We counteddown to . . . T-2 seconds and aborted on Spin Start," the Hawthorne,Calif.-based company said in a statement. "Given that this was our firstabort event on this pad, we decided to scrub for the day to get a good look atthe rocket before trying again. Everything looks great at first glance."

"We'll look to do the next static fireattempt in three or four days," SpaceX said.

SpaceX attempted the crucial prelaunchtest six days after completing what it described as a flawlesscountdown-and-propellant-loading exercise known in rocketry circles as a wetdress rehearsal.

An unspecified problem with the rocket's spinstart system prompted the abort, according to the statement. While the enginesnever ignited, video of the test shows a ball of flame followed by a cloud ofblack smoke erupting from the base of the 15-story-tall rocket.

"As part of the abort, we close thepre-valves to isolate the engines from the propellant tank and purge theresidual propellants. The brief flames seen on the video are burn off of [liquidoxygen] and kerosene on the pad. The engines did not ignite and there was noengine fire," SpaceX said in the statement. "We detanked and safedthe vehicle and launch pad. Preliminary review shows all other systems requiredto reach full ignition were within specification. All other pad systems workednominally."

During that flight the Falcon 9 will carry aprototype of SpaceX's Dragon space station cargo capsule into space. However,the mission will not count as one of the three demonstrations the company hasagreed to conduct for NASA under the U.S. space agency's Commercial OrbitalTransportation Services program.

NASA is counting on the Falcon9 and Dragon to deliver at least 20 tons of cargo to the internationalspace station over the next five years under a $1.6 billion contract awarded inlate 2008.