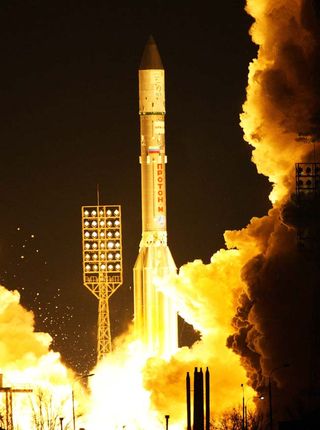 A Proton rocket blasted off in frigid subzeroweather late Thursday and successfully delivered a direct broadcastingsatellite into orbit for Latin America more than nine hours later.

After surpassing the speed of sound, theProton released its spent first stage two minutes into flight as the launcherreached the upper atmosphere. The Proton's second and third stages put thevehicle's Breeze M upper stage and the Intelsat 16 satellite into a ballistictrajectory less than 10 minutes after liftoff.

The Breeze M fired up its main engine forfour minutes to place itself in a parking orbit about 15 minutes into themission. A second Breeze M burn one hour later began raising its altitude andreducing its orbital inclination.

Two more Breeze M burns were accomplishedovernight, eventually sending the 5,401-pound spacecraft in anear-geosynchronous orbit with an altitude of more than 23,000 miles and aninclination of zero degrees.

The upper stage deployed Intelsat 16 at 1014GMT (5:14 a.m. EST), according to Intenational Launch Services, the U.S.-basedsales firm for commercialProton launches.

Intelsat 16's small size allows the powerfulProton booster and Breeze M upper stage to propel the payload directly to itshigh-altitude perch above Earth. Most communications satellites are left in egg-shapedtransfer orbits, and the craft's on-board propulsion system must finish thejob.

The direct injection of Intelsat 16 means thesatellite will conserve precious maneuvering propellant, extending its usefullife. The spacecraft may have enough propellant for up to 25 years, long beyondits 15-year design life, according to Ken Lee, Intelsat's senior vice presidentof space systems.

Intelsat 16 will nudge itself into itsoperational slot in geosynchronous orbit, appearing to hover over the equator at58 degrees west longitude.

Built by Orbital Sciences Corp., Intelsat 16carries 24 Ku-band transponders and two deployable antennas for itscommunications mission. The craft will be operated by Intelsat on behalf of SKYMexico and SKY Brazil.

Intelsat 16 will double SKY Mexico's currentcapacity and serve as a backup for the SKY Brazil network. The satellite willback up Intelsat 11 and compliment the 10-year-old Intelsat 9 spacecraft,according to mission officials.

"The launch of IS 16 is criticallyimportant for our Latin American customers," said David McGlade, CEO ofIntelsat. "Their [direct-to-home] business is growing so rapidly. We'rebringing refreshed capacity into the markets, and better resilience."

Intelsat 16 is the sixth company satellitelaunched on a Proton rocket since 1997. The spacecraft was originallycontracted to fly to orbit on a Land Launch Zenit rocket, but financial troubleand delays with Sea Launch caused Intelsat to switch to the Proton marketed byILS.

"Last year and this year, including theIntelsat 16 mission, we've been able to accommodate the needs of our customerswhen they needed to get launched on time and successfully," said FrankMcKenna, ILS president.

McKenna said ILS plans eight commercialProton flights in 2010, plus four or five missions for the Russian government.There may be room for another one or two launches this year, according toMcKenna.

Khrunichev, the Russian prime contractor forthe Proton rocket, has ramped up production of the workhorse rocket to between12 and 14 vehicles annually.

The next Proton launch is scheduled for March2 with three Russian government Glonass navigation satellites. A commercialmission carrying EchoStar 14 is on track for mid-March, an ILS spokespersonsaid.

The SES 1 communications satellite will bethe next commercial Proton flight after EchoStar 14, occurring some time thisspring.