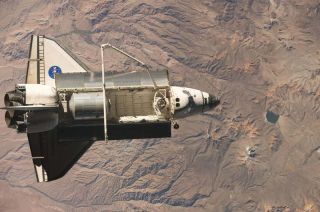 Rugged Earth terrain serves as the backdrop for shuttle Discovery after its STS-128 crew undocked from the International Space Station on Sept. 8, 2009. A station astronaut took this photograph of the shuttle as it departed.
(Image: © NASA)

It'slanding day for space shuttle Discovery, but thunderstorms in Florida may keepthe spacecraft and its astronaut crew in orbit an extra day.

Discoveryand its crew of sevenastronauts are due to land at NASA's Kennedy Space Center (KSC) in FloridaThursday evening at 7:05 p.m. EDT (2305 GMT) to wrap up a 13-day cargo run tothe International Space Station.

Thunderstormsmay creep too close to the shuttle's runway to allow a landing on one of twoopportunities today, and the Florida weather is expected to get worse Friday,Mission Control said.

"Theweather in Florida this time of year is always iffy," Discovery'scommander Rick Sturckow said from space Wednesday. "If things aren't good,the worst that can come out of it is we'll have another day in space, which isa great deal."

Earliertoday, Discovery had to fire its engines to dodge what Mission Control called “mysteryorbital debris,” a piece of space junk that was expected to fly too close to theshuttle for comfort. The debris separated from either Discovery or the spacestation on Saturday during a spacewalk, though NASA does not know what theobject is or its size.

Sturckowfired Discovery’s twin orbital maneuvering system engines to move theshuttle clear of the debris and it did not hamper the shuttle’s landingpreparations.

Discoveryblasted off late Aug. 28 and has enough supplies to remain in space until Sunday.But entry flight director Richard Jones said he wants to bring the shuttle homeby Saturday at the latest. A second landing window opens today at 8:42 p.m. EDT(0042 Sept. 11 GMT), but high winds and thunderstorms are also expected then.

If theweather in Florida shows no sign of letting up Saturday, Jones may opt to landthe shuttle Friday at a backup runway at California's Edwards Air Force Base.But a Florida landing is preferable since it will return Discovery to its homeport.

NASA'slanding rules require no thunderstorms within about 30 miles (48 km) of therunway to avoid flying shuttles through rain, which can damage their fragileheat shields. Discovery is carrying a special heat shield tile with anintentional "speed bump" as part of an unrelated experiment studyingre-entry heating, mission managers said.

BuzzLightyear is hitching a ride back to Earth aboard Discovery alongside itsastronaut crew. TheDisney toy launched to the space station in May 2008 as part of aneducational project. A tickertape parade at Walt Disney World awaits hislanding.

Buzz spentjust over 15 months at the station, dwarfing Kopra's time in space. Kopra hadhoped to spend another month in orbit, but his launch on a different shuttlewas delayed several times.

Discoverydelivered 18,548 pounds (8,413 kg) of food, science equipment and other vitalsupplies to the space station. The shuttle crew performed three spacewalks anddelivered an air-scrubbing device, the equivalent of an astronaut bedroom and anew treadmill named after TVcomedian Stephen Colbert.

Colbert wonan online poll to have a new space station room named after him earlier thisyear, but NASA gave him the treadmill - known as the Combined Operational LoadBearing External Resistance Treadmill - instead. The agency named the new roomTranquility after the Apollo 11 moon base.

Thetreadmill will be assembled by astronaut Nicole Stott, who arrived at the stationaboard Discovery and replaced Kopra as part of its six-person crew. ButCOLBERT, which is in more than 100 pieces, will have to wait until after a newJapanese cargo ship arrives at the station.

That cargoship, Japan's inaugural H-2 Transfer Vehicle, successfully launched today at 1:01p.m. EDT (1701 GMT) from the Tanegashima Space Center in southern Japan. Theunmanned spacecraft is packed with about 3 1/2 tons of cargo for both insideand outside the station and is due to arrive Sept. 17, when Stott plans topluck it from space with the outpost's robotic arm.