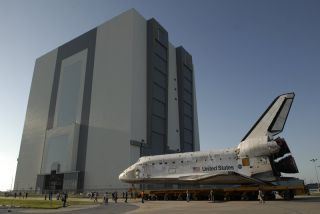 Space shuttle Discovery rolled out of its Orbiter Processing Facility 3 at NASA's Kennedy Space Center in Florida and headed for the massive Vehicle Assembly Building (at left) on July 26, 2009 for launch preparations for the STS-128 mission on Aug. 25.
(Image: © NASA/Kim Shiflett)

CAPE CANAVERAL - Theorbiter Discovery is in the Kennedy Space Center Vehicle Assembly Buildingtoday after a move Sunday from its nearby processing hangar.

Mounted atop a 76-wheeltransporter, the spaceship was backed out of its hangar around 7:22 a.m. androlled into the 52-story assembly building about an hour later.

Discovery is tentativelyscheduled to launch Aug. 25 on an International Space Station outfittingmission. Its move into the assembly building was delayed so engineers couldperform tests on its external tank.

An unusualamount of foam loss was noted on Endeavour's intertank area during its July15 launch. Engineers tested Discovery's tank to ensure that the problem wouldnot recur on NASA's next mission to the station.

Discovery'sflight will be the 128th shuttlemission and the 30th devoted to station assembly. It is one of sevenremaining before the shuttle fleet is retired late next year.