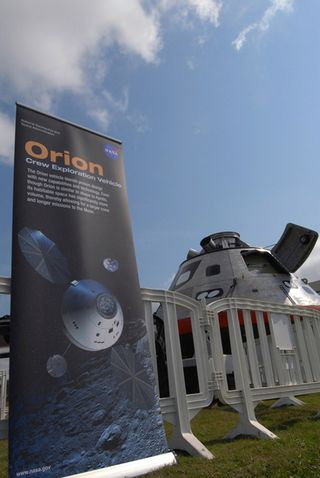 The OrionCrew Exploration Vehicle prototype is a seaworthy mockup of NASA?s spaceshuttle successor, a capsule-based spacecraft slated to begin ferryingastronauts to the International Space Station by 2015, andthen to moon by 2020.

The craftmade its way to NASA?s Kennedy Space Center in Cape Canaveral, Fla., from the NavalSurface Warfare Center in Bethesda, Md., where engineers and Navy divers beganwater recovery tests to understand how the 18,000-pound (8,164-kg) capsuleperforms after splashdown. The initial tests wereperformed in pool, but NASA is planning a second round of tests off thecoast of Florida to see how Orion ships behave in open water.

?The goalof the operation, dubbed the Post-landing Orion Recovery Test, or PORT, is todetermine what kind of motion astronauts can expect after landing, as well asoutside conditions for recovery teams,? NASA officials said.

NASA?sthree aging space shuttles are due to retire at the end of 2010. The Orionspacecraft are designed to launch atop the agency?s new Ares Irocket to ferry six astronauts to the space station or a four-person crewto the moon and back. The spacecraft and rocket, as well as the planned Altairlunar lander and heavy-lift Ares V booster, make up NASA?s Constellationprogram.

Afterleaving Maryland, themock Orion capsule stopped at the National Mall in Washington, D.C., to bedisplayed before arriving at Kennedy Space Center, where it can be seen at thespaceport?s Visitor?s Complex until Friday.

The openwater recovery test is due to begin on April 7.