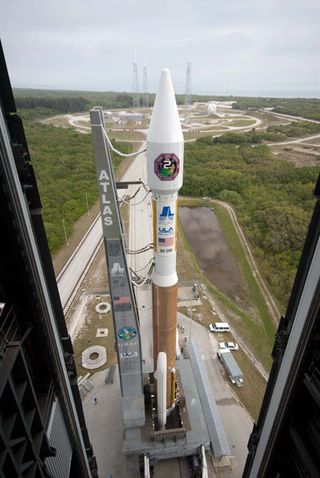 U.S.and allied forces in Iraq and Afghanistan, who face a shortage of widebandcommunications, will gain major additional capability pending the successfullaunch of the new Wideband Global Satcom spacecraft on its Atlas 5 rocket.

The 13,000-poundBoeing/U.S. Air Force spacecraft is poised to launch tonight from Cape Canaveral Air Force Station in Florida and will be moved to a geosynchronous orbitparking spot over the equator where it can support operations in the Iraq andAfghan theatres.

With solar arrays spanning157 feet, the spacecraft will provide an enormous increase in communicationservices needed by users in the area of responsibility under U.S. CentralCommand, headquartered in Tampa, Fla.

The WGS series is replacingthe far less capable Defense Satellite Communications System (DSCS). Each ofthe six plannedWGS spacecraft will be based on the Boeing 702 communications satellitebus.

The sixth and finalspacecraft in the series has been ordered by Australia.

The first of five WGSspacecraft for the U.S. Defense Dept. was launched fromCape Canaveral in October 2007. This first spacecraft is providingcommunications to all military services operating in the Pacific theatre.

One WGS has thecommunications throughput capability of the entire DSCS fleet. In fact, duringoperational testing with the first satellite, the government successfullytransmitted a record-breaking 440 megabits-per-second of communications throughthe original spacecraft.

The standard WGStransmission capability will be 2.5-3.3 gigabits per second - 10 times fasterthan an individual DSCS.

The new WGS satellites havea unique frequency conversion capability that will allow users on one frequencyto communicate through the same satellite with a user on a different frequency.

The satellite will operatein the 500 MHz range of X-band and the 1 GHz range of Ka-band, routing andcross filtering up to 4.875 GHz of instantaneous bandwidth.

Each spacecraft can servenearly 20 independent coverage areas. It can provide up to eight steerable andshaped X-band spot beams formed by separate transmit/receive phased arrayantennas. Along with that, it can project 10 Ka-band beams by independentlysteered and diplexed antennas, including three with selectable RF polarization.

The new satellite will beinvolved in serving a wide range of users from routine email through therouting of highresolution intelligence imagery, video and commands for the piloting ofPredator unmanned aerial vehicles (UAVs).

It will also be useful forclandestine operations.

Added satcom capabilitywill be welcome, says U.S. Air Force Capt. Wade H. McGrew, who leads the SpaceApplications Course taught at the Special Operations School at Hurlburt Field,Fla. The school prepares Special Operations personnel for often secretoperations in Iraq and Afghanistan, as well as other areas of the world.

In addition to teaching thecourse, McGrew has seen action with the Special Forces himself in Iraq.

"We need largeramounts of data faster," McGrew says. "As the [capability for] formore data grows we continue to grow our uses right along with it," hesays.

Capt. McGrew's educationalwork in the field and at Hurlburt to broaden the Special Forces' use of spacerecently earned him the 2009 National Defense Space Award from the National'sSpace Club's Florida Chapter.

The need for even morebandwidth will become more acute in the future, as the Army fields its FutureCombat System (FCS) designed to link far more vehicles with computer displays.Much greater use of UAVs and ground-based robotic vehicles will also increase bandwidthneeds that the WGS capabilities will begin to address.