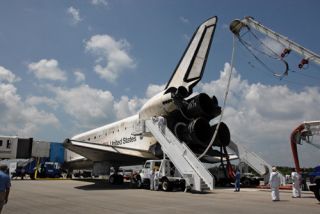 NASA aims to accelerate thecampaign to launch shuttle Atlantis in October by moving major pre-launchmilestones up about four days each, officials said Friday.

The 15-story external tankdesignated for the mission will be mated to twin solid rocket boosters on Aug.3 rather than Aug. 7, Kennedy Space Center spokeswoman Candrea Thomas said.

If all goes well, NASAhopes to advance the orbiter's move to the Vehicle Assembly Building, and thenits rollout to launch pad 39A, by about the same amount of time.

Schedules still are underevaluation, but in that case, the Atlantis move to the assembly building wouldcome around Aug. 18 rather than Aug. 22.

Rollout to the pad wouldcome around Aug. 25.

NASA wants to moveup its next two launches to make sure the second flies before a window ofopportunity closes in late November.

The Atlantis launch on a HubbleSpace Telescope servicing mission is scheduled for Oct. 8. Endeavour isslated to launch Nov. 10 on an International Space Station outfitting mission.

Managers will meet Aug. 14to see if earlier dates can be targeted.

The sun angle on thestation between Nov. 25 and Dec. 17 will be such that the outpost would not beable to generate enough power, or dispel enough heat, to support a dockedshuttle mission.

NASA also would opt not tolaunch during the Christmas or New Year's holidays.

That means Nov. 24 iseffectively the last day in 2008 to launch shuttlemissions to the station.