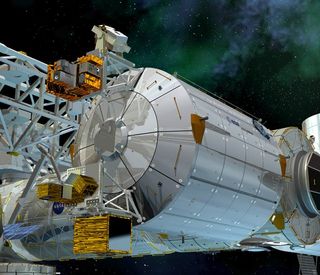 Atlantiswill ferry the 10.3-tonmodule to the International Space Station (ISS), where astronauts will attachit and make way for space-based science experiments throughout the next sevenyears. NASA intended Columbus to reach orbit in early December, but the agency postponedits launch to address problems with fuel gauge-like sensors in Atlantis'external fuel tank.

"We'rereally looking forward to getting Columbus on orbit to become an on-orbitmember of the space station club," said Alan Thirkettle, ISS programmanager for the European Space Agency (ESA). He noted that getting two ESAastronauts ? Hans Schlegel and Leopold Eyharts ? into space with the module willalso be a moment of triumph.

"They'rea real focal point not just of excitement but for inspiration as well,"Thirkettle said, noting that children across Europe are closely following theSTS-122 mission.

Columbus, which looks somewhat like anover-sized aluminum can, boasts about 2,648 cubic feet (75 cubic meters) ofspace within its polished shell. Thirkettle explained that this volume accommodates16 phone-booth racks as well as fourplatforms outside.

"Weget a lot of bang for our buck with the launch," Thirkettle said. The ESA spent about 880 million Euros ($1.3 billion) to build the lab.

Thirkettle couldn't say how many scientists hope to perform experiments vicariously through on-station astronauts, but did say there will be "a lot."

"Wewill, in fact, be getting science back from the Columbus laboratory data backwithin a week or 10 days of it's launching," he said. "That'ssomething we're very excited and very pleased about."

Commandedby Stephen Frick, the seven-astronaut crew of the STS-122mission will help piece Columbus together next week.

Missionspecialist Rex Walheim will lead the assembly tasks during three plannedspacewalks, two of which are dedicated to Columbus assembly.

Pilot AlanPoindexter and mission specialist Leland Melvin will join Frickand the other astronauts during their 11-day mission.

Thirkettlesaid he can't wait for the orbital work to commence.

"It'llbe nice to be part of the European Space Agency," Thirkettle said. "We'vebeen part of a 'European Ground Agency' for a long time, as far as [the] spacestation is concerned."