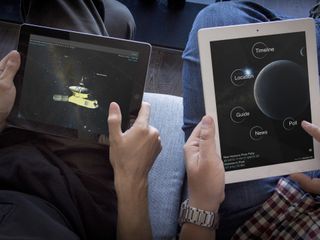 The free Pluto Safari app let New Horizons fans track the probe's flyby of Pluto in 2015, and now it's set to follow the journey past the distant body Ultima Thule on New Year's Day.

Pluto Safari, which can be downloaded here for iOS and here for Android, lets users access interactive views of the solar system as New Horizons approaches Ultima Thule, view a countdown timer of the spacecraft's closest approach, down to the second, and read the latest news about the flyby. The app also lets users virtually fly by some objects in the Kuiper Belt, the band of icy objects where Pluto and Ultima Thule make their homes. Users can also navigate a 3D model of Pluto's system, and one of New Horizons itself, as well as learn how to pinpoint the location of Ultima Thule in their night sky.

The app comes from Simulation Curriculum, the makers of the astronomy app SkySafari.

Ultima Thule, officially named 2014 MU69, is 1 billion miles (1.6 billion km) past Pluto, and New Horizons' approach will be the farthest solar system encounter ever undertaken by human spacecraft. By studying the object, researchers will learn about the earliest days of the solar system — of which Ultima Thule is likely a deep-frozen relic. From observations so far, researchers think it's reddish-colored and about 23 miles (37 km) wide, but they're prepared to learn a lot more after New Horizons takes a look. Ultima Thule may even turn out to be two objects orbiting a common center of mass.

New Horizons will fly past Ultima Thule at 14.16 km/s (8.8 miles/s), and scientists will get their first word back from the flyby at 10:28 a.m. EST (1528 GMT), according to the Planetary Society, confirming everything went well. Science data should begin to come in later that day, including a first small photo.