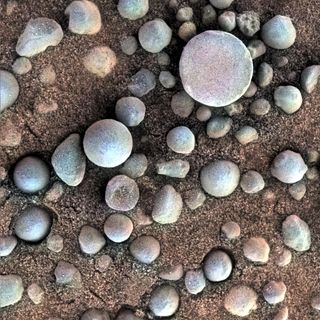 Early in its mission, the Opportunity rover spotted round, iron-rich concretions nicknamed "blueberries," which constituted one of several different types of evidence suggesting that Mars used to be wet. This (false-color) photo captures an area just 1.2 inches (3 centimeters) across.
(Image: © NASA/JPL-Caltech/Cornell/USGS)

It was just a few months after NASA's Opportunity rover touched down on Mars in 2004 that it spotted a geological curiosity: tiny, iron-rich spheres scattered across the rock surface near the robot's landing site. Snack-loving scientists working with the mission dubbed these objects "blueberries," but the features were easier to name than to understand. Their recipe remains something of a puzzle.

Trying to sort out the origins of these blueberries has always involved studying similar-looking spherical formations here on Earth. New research takes its inspiration from these terrestrial analogs to offer a new idea of the chemistry that may have gone into whipping up these Martian blueberries. In turn, this research helps reveal what ancient Mars may have looked like.

The blueberries are tantalizing for more than just their whimsical name; they also constituted some of the earliest evidence we had that Mars was once incredibly wet. "No matter what the exact chemistry of these spherules was to start, the fact that they're there tells us [that] a lot of liquid water moved through these rocks over time," Briony Horgan, a planetary scientist at Purdue University in Indiana, told Space.com. [10 Amazing Mars Discoveries by Rovers Spirit & Opportunity]

And if scientists can parse out precisely how the blueberries formed, that may help us understand what Mars was like back when the features formed — and what sort of life could have theoretically thrived in those circumstances, Horgan said.

So, the team behind the new research traveled to two different terrestrial destinations in search of rock formations that resemble Martian blueberries: Utah and Mongolia. These formations aren't identical to those on Mars, which are about a tenth the size of the Earthly equivalents. Our planet's formations are also less orderly than the Martian versions. "They're all blobbed together. They're different sizes," Horgan said of the terrestrial features.

But it's much easier to get to Utah and Mongolia than to Mars, so scientists use these features despite the imperfect comparison. The researchers found that the formations seemed to have been built around cores of a mineral called calcite, with iron-rich material in only the outer shell. "That moment [of discovery], it was very exciting," geochemist co-authors Hidekazu Yoshida of Nagoya University and Hitoshi Hasegawa of Kochi University in Japan, wrote in an email to Space.com.

Based on those observations in the field and chemical modeling, the scientists suggested that floods of iron-rich, gently acidic water washed over the original calcite structures. Unlike the terrestrial versions, Martian blueberries seem to be made of hematite all the way through, no longer sporting any calcite heart. But that could point to a long period of overwash that ate through all the calcite, the researchers said.

The nagging details of chemical reactions that may or may not have taken place on early Mars have larger implications. First, these details are relevant to scientists' natural interest in all that water that flowed through rocks to form the blueberries. "The chemistry of water tells us about the habitability of the environment," Horgan said.

The second potential implication would relate to another long-standing debate about Mars — what happened to its once-thick atmosphere. The authors in the new study argued that this atmosphere could have gone into the carbonate ions locked in calcite precursors to the blueberries.

But that wouldn't solve the atmospheric mystery, Steve Ruff, a planetary geologist at Arizona State University who works on the Opportunity mission, told Space.com. "My sense of what we know about the area of the hematite that we can map from orbit is it's not a huge area," covering less than 1 percent of Mars' surface, he said. There just aren't enough blueberries to pack away very much atmosphere. [Latest Mars Rover Photos from Opportunity & Spirit]

He said he also worries that Earth's formations aren't similar enough to those on Mars for scientists to learn about the blueberries. But Ruff didn't dismiss the new paper. "I'm intrigued by this idea," he said. "The formation of these little concretions on Earth and certainly on Mars has always been a bit of a mystery, and there's multiple ideas about how you form these things."

The Martian blueberries are small enough that in order to truly solve their mystery, scientists will need more-sophisticated tools than are currently on the Red Planet. NASA's next rover, the Mars 2020 rover, will carry instruments with high enough resolution that they could tackle these questions. But that rover is slated to visit a place called Jezero Crater, far away from the plain where Opportunity spotted the blueberries.

"Going back to places on Mars with NASA is not something people want to do. They want to go to new places," Ruff said. Nevertheless, he said he isn't giving up hope that the new rover could solve the blueberry mystery. "Maybe we'll get lucky and see something like this with the 2020 rover."

Whatever the nuances of blueberry chemistry turn out to be, the new paper is a reminder of the vast time scales — and the potential complexity such time scales entail — involved in Martian geology, Horgan said. "Time can play a really important role in the minerals that we see," Horgan said. "We should be careful. There could have been multiple things that happened to these rocks."

The research is described in a paper published today (Dec. 5) in the journal Science Advances.