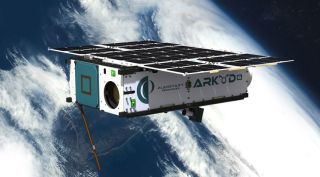 WASHINGTON — Planetary Resources Inc., once a high-flying company backed by billionaires with aspirations to mine asteroids, only to later suffer funding problems, has been acquired by a blockchain company, the firms announced Oct. 31.

Planetary Resources said in a statement that it was acquired by ConsenSys, Inc. in an "asset-purchase transaction." The companies did not disclose specific terms of the agreement. Chris Lewicki, the president and chief executive of Planetary Resources, and Brian Israel, the company's general counsel, will join ConsenSys as part of the deal.

ConsenSys was founded by Joseph Lubin, one of the co-developers of Ethereum, in 2015. It said it has more than 1,100 employees on six continents. ConsenSys has more than three dozen "spokes," or companies working on various projects that make use of Ethereum, including financial management company Balance, journalism platform Civil and gaming company Virtue Poker.

In a statement, Lubin said that Planetary Resources' expertise in space would be folded into ConsenSys. "Bringing deep space capabilities into the ConsenSys ecosystem reflects our belief in the potential for Ethereum to help humanity craft new societal rule systems through automated trust and guaranteed execution," he said, referring to the "smart contracts" enabled by Ethereum. "And it reflects our belief in democratizing and decentralizing space endeavors to unite our species and unlock untapped human potential."

Lubin didn't disclose how specifically Planetary Resources fit into his company other than that he would be "sharing our plans and how to join us on this journey in the months ahead."

Planetary Resources first announced its asteroid mining plans in 2012 after three years in stealth mode. The company's original vision called for prospecting near Earth asteroids for water ice that could later be extracted and then sold as propellant. "I think we'll have propellant depots in operation within the decade," Eric Anderson, the co-founder and original co-chairman of the company, said in a 2012 interview.

Anderson, best known in the space industry as the co-founder and chairman of space tourism company Space Adventures, established the company with Peter Diamandis, founder of the X Prize Foundation. The company's initial investors featured a group of wealthy individuals, including Google co-founder Larry Page and chairman Eric Schmidt, Ross Perot Jr., and Charles Simonyi, the former Microsoft executive who flew to the International Space Station twice as a client of Space Adventures. Richard Branson later invested in the company, as did the government of Luxembourg's SpaceResources.lu initiative.

The company developed a series of cubesats to serve as technology demonstrators for future asteroid prospectors. The first, Arkyd-3, was lost in the October 2014 Antares launch failure. A second, Arkyd-3R, was deployed from the ISS in July 2015, followed by Arkyd-6 in January on an Indian Polar Satellite Launch Vehicle.

By the time Arkyd-6 was in orbit demonstrating its mid-wave infrared imager, though, the company was in financial difficulties. Planetary Resources made was industry sources said were substantial layoffs early this yea when it was unable to close a funding round.

Lewicki said in a March interview the lead in that planned funding round was an unnamed "major global mining company" that delayed an investment it planned to make last year for budget reasons. "We just have to adjust everything and find the right timing and the right value proposition," he said then.

In the statement about the ConsenSys acquisition, Lewicki and Israel offered few details about Planetary Resources' future. Israel, a former State Department lawyer who worked on issues such as the Outer Space Treaty, suggested that the company could leverage ConsenSys' technology for space commerce.

"Ethereum smart contract functionality is a natural solution for private-ordering and commerce in space — the only domain of human activity not ordered around territorial sovereignty — in which a diverse range of actors from a growing number of countries must coordinate and transact," Israel said.

"I am proud of our team's extraordinary accomplishments, grateful to our visionary supporters, and delighted to join ConsenSys in building atop our work to expand humanity's economic sphere of influence into the solar system," Lewicki said in the statement.

In a comment attached to the statement on the Planetary Resources' website, one person asked if the ConsenSys acquisition would allow for alternative "tokenized" investment into Planetary Resources using Ethereum. "That's a possibility that could be enabled by the new venture," Lewicki responded. "Stay tuned!"