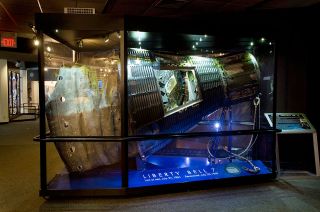 The Mercury spacecraft "Liberty Bell 7," seen here on exhibit at the Cosmosphere in Hutchinson, Kansas, will be the early centerpiece of a new exhibit at the museum's satellite location in Overland Park opening in February 2019.
(Image: © Cosmosphere)

The historic capsule that carried the second American to fly into space is set to land in the second most populous city in Kansas in early 2019.

"Liberty Bell 7," the Mercury spacecraft that was piloted by NASA astronaut Virgil "Gus" Grissom on a 1961 suborbital spaceflight, will be the early centerpiece of a new exhibit by Cosmosphere Innovation Space at Bluhawk in Overland Park. The Innovation Space is the planned satellite facility for the Cosmosphere International SciEd Center and Space Museum in Hutchinson, Kansas, which hosts the largest combined collection of U.S. and Russian space artifacts in the world.

Bluhawk is a $750 million, 277-acre mixed-use development that in addition to the Cosmosphere will feature an indoor multi-sport complex, hotel and restaurant and retail marketplace. [Photos from Gus Grissom's Liberty Bell 7 Spaceflight]

"We have an exceptional plan that meets the needs of Cosmosphere, Bluhawk and the public, which is eager to see tremendous exhibits like Liberty Bell 7 as soon as possible," said Jim Remar, president and CEO of the Cosmosphere, in a statement. "Opening a temporary Cosmosphere location in early 2019 is a big win for all parties as we continue forward with the plans for our satellite location."

Since June 2016, Liberty Bell 7 has been on display at The Children's Museum of Indianapolis, where it has been a part of the "Beyond Spaceship Earth" exhibit. Before that, the Cosmosphere shipped the space capsule overseas for an exhibit at the Art and Exhibition Hall of the Federal Republic of Germany in Bonn.

Launched on July 21, 1961 on Grissom's 15-minute Mercury-Redstone 4 mission, Liberty Bell 7 sank due to a premature hatch jettison soon after splashing down. It remained on the ocean floor for 38 years until July 1999, when it was recovered by a private expedition organized by Discovery Channel and the Cosmosphere. The museum's SpaceWorks division restored the spacecraft before sending it on a six-year nationwide tour.

Liberty Bell 7 is slated to return from Indiana to the Cosmosphere in Hutchinson in mid-December.

The capsule's new temporary exhibition will give visitors to Bluhawk the chance to learn more about space history and the role the Mercury spaceflights played in the United States winning the space race with the former Soviet Union.

"We are very pleased that Overland Park residents and visitors will have an early look at this historic exhibit and others," said Doug Price, president of Price Brothers, the developer of Bluhawk. "This new exhibition is a great venue for the Cosmosphere to test new ideas while we are developing extensive plans for its new satellite location."

The Liberty Bell 7 exhibit at Bluhawk is scheduled to open in February 2019. It will be followed a few months later by an exhibit devoted to Mission Control, featuring consoles restored by the Cosmosphere and used in the filming of the movie "First Man." Other displays are anticipated to rotate on a regular basis.

Cosmosphere Innovation Space is planned as a 60,000 square foot facility located at 159th Street and U.S. Highway 69 in Overland Park. The Bluhawk site is not intended as a substitute for the Hutchinson museum, but will expose more people to the Cosmosphere brand, allow them to experience the SciEd Center's approach to science, technology, engineering and math (STEM) education and see artifacts currently not on display due to space limitations.

Cosmosphere Innovation Space is part of the first phase of Bluhawk, scheduled to break ground in 2019 and open the following year.