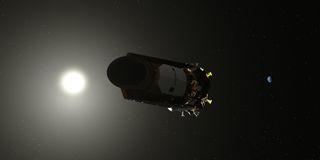 The reign of NASA's champion exoplanet-hunting telescope Kepler may be coming to an end this month, according to an update from the agency posted yesterday (Sept. 28).

That's because two systems are troubling the aging telescope: New data shows that the instrument is struggling to point precisely across the heavens, even as it continues to run out of fuel, according to the agency statement.

The team behind Kepler has turned off the instrument temporarily, then will wake it up again on Oct. 10, when it is due to send its next batch of data back to Earth. At this point, according to NASA, there's no way to tell whether that process will be successful. If it is, they'll set the telescope back to gathering data, trying to eke out as much as possible from the machine.

The telescope has been running low on fuel reserves for six months now. The spacecraft doesn't carry a precise gauge, leaving scientists unable to estimate precisely how much juice it has left or how long it will last.

And Kepler's loss of pointing accuracy is also just the newest development in a continuing struggle: In 2013, the second of four wheels that kept the telescope staring at the same patch of sky for four years broke. NASA gave the instrument a second life as the mission K2, which gazes at a set region for a couple months, then moves to a new one.

Between the two missions, the instrument has identified more than 2,600 planets — two-thirds of the total exoplanet discoveries scientists have made to date. In both cases, the instrument measured the brightness of individual stars over time, looking for the repetitive, slight dips in brightness caused by a planet passing between the telescope and the star.

Kepler's successor mission, the Transiting Exoplanet Survey Satellite, or TESS, has already identified its first two candidate exoplanets, and scientists hope it will tally as many as 10,000 during its first two years of work.