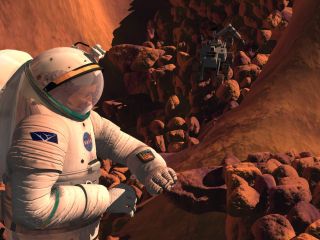 An artist's depiction of humans working on Mars.
(Image: © NASA)

A group of senators heard expert opinions during a committee hearing on Wednesday (July 25) about what will be required — logistically and scientifically — to safely land humans on Mars.

The hearing was coordinated by Sen. Ted Cruz (R-Texas), who is chair of the Subcommittee on Space, Science, and Competitiveness. "Mars is today the focal point of our national space program," Cruz said during opening remarks. "If American boots are to be the first to set foot on the surface, it will define a new generation — generation Mars."

But right now, NASA's focus seems to be split between the moon and Mars — a point raised by Sen. Bill Nelson (D-Fla.), the ranking Democrat on the subcommittee, who asked whether the NASA budget is being "robbed" because efforts aimed at a journey to the moon are drawing resources away from the real priority of Mars. [Path to Mars Should Be Flexible, Experts Agree]

The panelists seemed to push back against that portrayal, arguing that low-Earth orbit and lunar missions offer valuable testing grounds for technologies humans will need to reach Mars at all. But the real goal of the hearing seemed to be one of building a case for a long-term, firm NASA vision. Three of the panelists talked about the importance of stable funding and priorities.

"We have to have a vision that lasts more than one administration," veteran astronaut Peggy Whitson said. "We have to have a budget line that will support those goals and objectives that we are striving to reach."

The industry representative on the panel underscored that point as well, citing the challenge of retaining expert staff when mission budgets are unpredictable. "Funding stability is absolutely vital in industry," said Tory Bruno, head of United Launch Alliance. "If you don't have work for the people on your team to do, they scatter."

The four panelists also seemed intent on balancing the abstract value of a Mars mission with the tangible spin-off technologies such a journey would create.

"You can't put a price tag, you can't put importance on how Apollo fundamentally changed all of us," said Dava Newman, an engineer at the Massachusetts Institute of Technology. "That's how I look at the Mars mission now — we get humans there with all our great science, it will just lift us up." But she was also careful to mention more concrete potential benefits, like anti-cancer advances that could spring from tackling the threat posed by radiation in space.

Another clear takeaway from the testimony was the sheer number of tasks NASA needs to accomplish before such a mission can become a reality: everything from figuring out how to land larger spacecraft on Mars to developing systems that can function completely independently of Earth to making sure astronauts can withstand the mental challenges of being so far from home.

All those tasks mean NASA can't do it alone and needs to find a way to bring other countries as well as private companies into the mix. "People make it sound like the government is actually building all the hardware," said Chris Carberry, head of Explore Mars, a nonprofit organization dedicated to promoting exploration of Mars. "They're not."