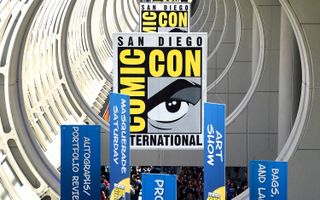 Put simply, Comic-Con International: San Diego is the granddaddy of comic and sci-fi conventions. Every year, the conference center fills, the streets of the old Gaslamp Quarter are packed and the carnival atmosphere is in full swing with enthusiastic sci-fi fans and out-of-this-world costumes.

So you don't get lost in a maelstrom of marketing at this year's Comic-Con, which runs from July 19 to 22, we've scanned the schedule and pulled out the can't-miss panels and screenings that space lovers should make their top priority.

Look out for panels on your favorite science-fiction franchises and lots of special NASA guests (including a couple of astronauts) discussing the search for alien life and how to build technology to last on other worlds. First, we'll provide some tips and tricks for navigating the convention, and then we have a list of the best space-themed events. [Biggest Space Movies to Watch in 2018]

The most important thing to remember if you've never been to San Diego Comic-Con before is that you won't be able to do everything; there's just too much going on. The convention isn't limited to the conference center; there are events, talks and panels held in venues all around the Gaslamp Quarter and downtown. Even the nearby baseball stadium, Petco Park, is sometimes used for special events. So the way to guarantee maximum enjoyment is to carefully plan your itinerary and factor in time to get from one location to another.

Hall H is something of a legend. This is the single biggest room in the San Diego Convention Center, with a capacity of over 6,000, and it is used for only the very biggest and most high-profile panels. Queues for Hall H wrap around the building, along the waterfront and beyond. To ensure you get into the event you want to see, you'll be required to spend the best part of a day in line. Consequently, if you're attending on your own, you'll have to sacrifice everything else that's on for the day. As veterans of San Diego Comic-Con, we recommend you go in groups of at least four, if possible, with two setting up camp under a beach umbrella — you'll be thankful you brought one along — and the other two wandering off and watching whatever they want. Then, after a little while, you swap. Agree beforehand who wants to see what, and make a fair plan accordingly.

If you're not prepared, Comic-Con can turn into a desperate struggle, and often the littlest things make the biggest difference. Keep these things in mind:

Now, on to the schedule highlights, drawn from the convention website:

Writer/director Spencer F. Lee brings together Nichelle Nichols, Rod Roddenberry, Kerry O' Quinn, Tom DeSanto, Cecil Grimes, Douglas Tait and Greg Grunberg to introduce their new documentary on the evolution of science fiction and fantasy comic books and the positive impacts that they have had on society as a whole.
Time: 10 a.m. to 11 a.m.
Place: Ballroom 20

The "Stargate" franchise made an invaluable contribution to television sci-fi, and Kieran Dickson will moderate a discussion with panelists Christopher Judge, Darren Sumner and David Read as they share their creative process and behind-the-scenes stories.
Time: 12 p.m. to 1 p.m.
Place: Room 7AB

Panelists will examine Stanley Kubrick's science-fiction masterpiece "2001: A Space Odyssey," which will be released in 4K Ultra High Definition this fall. The stars of the film, Keir Dullea and Gary Lockwood, and an impressive array of scholars will give attendees a glimpse at the remastered footage and host a lively discussion of this landmark movie.
Time: 12:30 p.m. to 1:30 p.m.
Place: Room 6A

"Snoopy Space Traveler: The History and Future of Snoopy and NASA"

Discover how cartoonist Charles M. Schulz partnered with NASA to bring everyone's favorite beagle to the moon in this retrospective panel about the history and future of Snoopy in space.
Time: 3 p.m. to 4 p.m.
Place: Room 28DE

"The Science of Star Trek"

The cast and producers look back on Season 1 of "Star Trek: Discovery" and find out where the crew is headed as the show transports into its second season. Cast members scheduled to appear include Sonequa Martin-Green, Doug Jones, Shazad Latif, Mary Wiseman, Anthony Rapp, Wilson Cruz, Mary Chieffo and Anson Mount, alongside executive producers Alex Kurtzman and Heather Kadin. [Where Should 'Star Trek: Discovery' Boldly Go in Season 2? We've Got a Few Ideas]
Time: 1:30 p.m. to 2:30 p.m.
Place: Hall H

"Publishing: Stories from a Galaxy Far, Far Away!"

Michael Siglain (creative director, Disney-Lucasfilm Publishing) and surprise panelists share previews and exclusive announcements about what should be on your must-read list from "Star Wars" publishing.
Time: 2 p.m. to 3 p.m.
Place: Room 7AB

"The Science of Star Wars"

"To Infinity & Beyond: Our Dreams for the Future Take Flight"

For centuries, from Nicolaus Copernicus and Jules Verne to Elon Musk and Jeff Bezos, visionaries have offered their dreams of the future and, in doing so, inspired mind-blowing innovation. An all-star panel of creators and innovators discuss their greatest influences and what they envision for the future.
Time: 4 p.m. to 5 p.m.
Place: Room 23ABC

"Star Trek" author Larry Nemecek hosts a panel of "Star Trek" podcasters asking if age, or even tech affinity, is amplifying the controversies surrounding "Star Trek: Discovery" or if it is all much ado about nothing. You can be a part of the Q&A, which will be recorded live for later podcast use.
Time: 5 p.m. to 6 p.m.
Place: Neil Morgan Auditorium, San Diego Central Library

"Moonbase and Beyond: The New Push to Deep Space"

Panelists Cady Coleman (former NASA astronaut), Bill Pratt (advanced human spaceflight systems, Lockheed Martin) and Marshall Smith (director of exploration systems at NASA), along with moderator Steve Broback (co-founder, Dent Conference), discuss how the moon will serve as a stepping-stone toward eventual missions to Mars and deeper into the solar system. [Back on the Ground: Q&A With Astronaut Cady Coleman]
Time: 5 p.m. to 6 p.m.
Place: Room 4

After a mind-blowing Season 1 finale that saw Krypton's history drastically rewritten, the future of Superman has never been in greater jeopardy. Cast members Cameron Cuffe, Ann Ogbomo, Wallis Day and Shaun Sipos and showrunner Cameron Welsh give an inside look into what fans can expect in Season 2.
Time: 12 p.m. to 12:50 p.m.
Place: Indigo Ballroom, Hilton San Diego Bayfront

"Explore the Wonders of the Universe with Cosmos: Possible Worlds"

"Hollywood & Emerging Tech: The Next Level of Entertainment"

Celebrate the intersection of entertainment and virtual reality, augmented reality, extended reality and other cool technologies making the world a more exciting place. You can also immerse yourself in these experiences at the Future Tech Live! pavilion in the Omni Hotel.
Time: 3:30 p.m. to 4:30 p.m.
Place: Room 24ABC

Cast members from "The Orville" — including Seth MacFarlane, Adrianne Palicki, Penny Johnson Jerald and Scott Grimes — and executive producers David A. Goodman, Brannon Braga, and Jon Cassar give an exclusive look at some of the new and exciting missions in the upcoming second season.
Time: 4 p.m. to 4:50 p.m.
Place: Indigo Ballroom, Hilton San Diego Bayfront

"Genetic Mutations: Will We All Be Metahumans One Day?"

Get all the information you need to build your own fully functional droid character from the "Star Wars" universe. Moderator Victor Franco and panelists Mike Senna, Michael McMaster, William Miyamoto, Chris Romines and Thomas Roeoesli share their knowledge and expertise to help make your build a success. [Move Over, R2-D2! NASA Already Has Plenty of Robots in Space]
Time: 10 a.m. to 11 a.m.
Place: Room 11

"The Science of Comic Vampires and Zombies"

In a panel moderated by Jonathan Bacon-Liu (host of "All the Time We Have" podcast), Jonathan Maberry (author, "V Wars") will bring his expertise in all things scary as he is joined by Ronald Coleman (expert in regenerative medicine) and Sharon Schendel (expert in immunology) to talk about how these monsters might work in the real world and where science and imagination intertwine.
Time: 10 a.m. 11 a.m.
Place: Grand 9, Marriott Marquis San Diego Marina

"'Disco' Was My First: Any Star Trek Newbies?"

Larry Nemecek ("The Trek Files") will lead a forum of audience opinions and feedback on the latest addition to the "Star Trek" franchise. As usual, there will be plenty of past, present and future "Trek" as well, with bloopers, inside jokes, anecdotes and visuals
Time: 1 p.m. to 2 p.m.
Place: Grand 9, Marriott Marquis San Diego Marina

"No Tow Trucks Beyond Mars"

NASA JPL's David Rosing, Shonte J. Tucker, Robert Lock, Kobie Boykins and Laura Kerber discuss how they go boldly when there's no one around to fix it. Hear stories from the trenches of the heartbreaks, close calls and adventures of real-life solar system exploration.
Time: 2 p.m. to 3 p.m.
Place: Room 32AB

"The Science of Westworld"

"Harlan Ellison: A Celebration of His Life and Works"