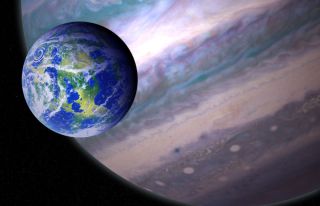 Researchers have identified more than 100 giant exoplanets that may have potentially life-hosting moons.

The new analysis could change the way scientists search for life in the cosmos, study team members said.

That search has generally focused on places more or less like Earth — rocky planets in the "habitable zone" of their host star, that just-right range of distances where liquid water could exist on a world's surface. Jupiter-like planets don't seem like good candidates in this regard, because they have no discernible surface. But the rocky moons of such gas giants may be a different story, study team members said. [How Habitable Zones for Alien Planets and Stars Work (Infographic)]

"There are currently 175 known moons orbiting the eight planets in our solar system," study co-author Stephen Kane, an associate professor of planetary astrophysics at UCR and a member of UCR's Alternative Earths Astrobiology Center, said in a statement.

"While most of these moons orbit Saturn and Jupiter, which are outside the sun's habitable zone, that may not be the case in other solar systems," Kane added. "Including rocky exomoons in our search for life in space will greatly expand the places we can look."

The research team pored through the databases of NASA's Kepler space telescope, which has discovered about 70 percent of the 3,700 known exoplanets to date. They flagged 121 gas giants that appear to orbit in the habitable zone.

No exomoons have yet been confirmed. But if any of those huge exoplanets have natural satellites — which seems likely, given how common moons are in our own solar system — they could be especially promising abodes for life, study team members said. For example, potential lifeforms on their surfaces could tap energy coming directly from their star, and light reflected off their parent planet as well.

"Now that we have created a database of the known giant planets in the habitable zone of their star, observations of the best candidates for hosting potential exomoons will be made to help refine the expected exomoon properties," study lead author Michelle Hill, an undergraduate student at the University of Southern Queensland who is working with Kane, said in the statement.

"Our follow-up studies will help inform future telescope design so that we can detect these moons, study their properties, and look for signs of life,” added Hill, who will join UCR's graduate program in the fall.

The new study has been accepted for publication in The Astrophysical Journal. You can read a copy of it for free at the online preprint site arXiv.org.