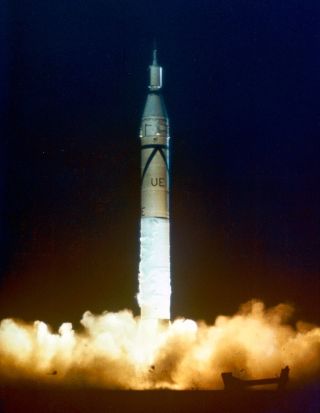 Most of us weren't around to witness the launch of the United States' first successful satellite, Explorer 1, on Jan. 31, 1958. But we can still get a sense of the drama and importance of the moment from the newsreels that documented it.

NASA's Jet Propulsion Laboratory (JPL) in Pasadena, California, has compiled several of these contemporary accounts into a 60th-anniversary celebration video, which you can watch below. [Explorer 1: The First American Satellite in Pictures]

JPL was a major player in the Explorer 1 story: The satellite was designed and built at the facility, which at the time had no affiliation with NASA. That latter tidbit of information may surprise you, but it shouldn't: NASA didn't exist yet. The agency wasn't established until July 29, 1958, and it didn't begin operations until Oct. 1 of that year.

Explorer 1 was America's first substantive response to the historic space successes of the Soviet Union, which launched the first-ever satellite, Sputnik 1, on Oct. 4, 1957, and put the first animal in orbit (a dog named Laika) aboard Sputnik 2 a month later. (The U.S. tried to launch a small satellite called the Vanguard Test Vehicle 3 on Dec. 6, 1957. However, it was lost on the pad in a spectacular rocket explosion.)

"The legacy of Explorer 1 really permeates throughout the agency," Barry said in another video about the pioneering satellite.

If you want to get a feel for the impact Explorer 1 had on the American public, check out these vintage newsreel films on YouTube. They each run between 20 and 30 minutes.