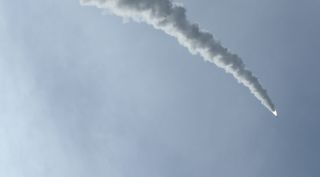 Kepler's first satellite, Kipp, launched Jan. 19 on a Long March 11 as a precursor to a constellation of up to 140 cubesats.
(Image: © Kepler Communications)

Kipp is the first Canadian satellite launched on a Chinese rocket, and according to Clyde Space and Kepler, also the first commercial low-Earth-orbit (LEO) satellite to use Ku-band frequencies.

Kepler co-founder and CEO Mina Mitry told SpaceNews in a 2017 interview that one of the advantages of being a Canadian company is the freedom to launch from a wider range of vehicles than U.S. startups, which are barred from Chinese rockets by U.S. export-control laws. Dutch company Innovative Space Logistics arranged the launch of Kipp.

Kepler is one of 11 companies that followed OneWeb in asking the U.S. Federal Communications Commission for Ku- or Ka-band spectrum rights to provide non-geosynchronous satellite services in the United States.

The company is only the second of those 11 to launch a prototype satellite. Telesat, the Canadian satellite fleet operator, was first, launching a LEO smallsat built by Britain's Surrey Satellite Technology, Ltd. on an Indian Polar Satellite Launch Vehicle that lifted off Jan. 11.

Mitry told SpaceNews by email Jan. 17 that Kipp is designed to last two years but is expected to stay in orbit 17 years before deorbiting from atmospheric drag. The satellite does not have its own deorbit system, he said.

"There are companies out there putting hard drives on helicopters and flying them around because there aren't alternatives to transport bulk data," Mitry said in a press release. "This standard practice will gradually be replaced by affordable connectivity solutions like ours to move data from remote locations, simplifying logistics and improving business sustainability in the long term."

Mitry told SpaceNews that Kepler's first satellite will be able to connect marine vessels, oil & gas platforms, mines, agriculture fields, and other businesses that are not latency-sensitive. Industrial Internet of Things (IoT) sensors and operators of very small aperture terminals seeking to limit their use of more expensive geostationary links can also use Kipp, he said.

Connecting devices on Earth is the initial focus of Kepler's business, to be followed by intersatellite links that connect other spacecraft around the planet. Kepler says its satellite will eventually be able to connect other satellites, space stations and space transport vehicles.

Kepler's second demonstrator, Case, is launching later this year and will include upgrades based on lessons learned while designing Kipp. Mitry said Case (named after another "Interstellar" robot) won't test intersatellite links. "That comes later in our roadmap," he said.

Like Telesat, Kepler has yet to place a large satellite order for its megaconstellation. Clyde Space was hired only for Kepler's first two satellites. At least two other companies anticipate having megaconstellation spacecraft in orbit this year. A SpaceX official said in October that the company planned to have the first of its 4,425 LEO broadband satellites launching "within the next few months," and OneWeb's first launch for its first-generation, 720-satellite fleet is scheduled for May on an Arianespace Soyuz.

More direct competitors for Kepler include Adeline, Australia-based Fleet and Vancouver, Canada-based Helios Wire, both of which have two IoT-focused satellites expected to launch this year.