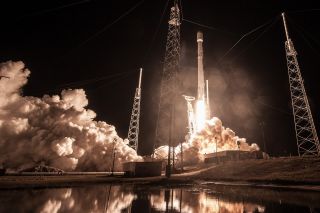 The U.S. Air Force has given SpaceX a qualified vote of confidence in the wake of the presumed loss of the mysterious Zuma satellite, according to Bloomberg News.

The news bolsters SpaceX's claim that its Falcon 9 rocket performed just fine during the Jan. 7 launch of Zuma, which apparently never reached orbit, according to unconfirmed reports.

"Based on the data available, our team did not identify any information that would change SpaceX's Falcon 9 certification status," Lt. Gen. John Thompson, commander of the Air Force's Space and Missile Systems Center, told Bloomberg News in a statement. [See amazing photos of SpaceX's Zuma launch]

This assessment came after "a preliminary review of telemetry that was available to us from” the Zuma liftoff, Thompson told Bloomberg News, stressing that "the Air Force will continue to evaluate data from all launches."

The secrecy surrounding Zuma is extreme. Pretty much all we know is that Northrop Grumman built it for the U.S. government (which agency was in charge is unclear) and that the payload was headed to low Earth orbit.

Nobody has even confirmed that Zuma failed to reach orbit as planned, though the scuttlebutt in the spaceflight community posits that the satellite failed to separate from the Falcon 9's second stage and, as a result, ended up plummeting to Earth along with the launch gear. (The Falcon 9's reusable first stage, meanwhile, made a pinpoint landing at Landing Zone 1, a SpaceX facility at Florida's Cape Canaveral Air Force Station. The rocket lifted off from Cape Canaveral's Space Launch Complex 40.)

SpaceX has stressed that any blame for the Zuma failure — if indeed the mission failed — falls on someone else's shoulders.

"For clarity: After review of all data to date, Falcon 9 did everything correctly on Sunday night," SpaceX President and Chief Operating Officer Gwynne Shotwell said in a statement on Jan. 9.

"If we or others find otherwise based on further review, we will report it immediately," Shotwell added. "Information published that is contrary to this statement is categorically false. Due to the classified nature of the payload, no further comment is possible."

Zuma was SpaceX's third national-security mission for the U.S. government. The California-based company also launched the NROL-76 satellite for the National Reconnaissance Office in May 2017 and the Air Force's robotic X-37B space plane in September of that year. Both of those liftoffs were successful.