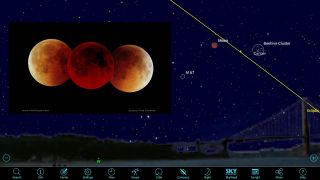 Mobile astronomy apps such as SkySafari 6 are an ideal tool to preview celestial events. The total lunar eclipse on the morning of Jan. 31, 2018 features an enlarged supermoon. It's also a Blue Moon, the second full moon in January — a combination that hasn't occurred in many years. In the eastern US and Canada, the moon will set mid-eclipse. But skywatchers in the west will be able to watch the entire eclipse, as shown here near the end of the eclipse at 6:15 a.m. PST in San Francisco, CA. By telling you where in the sky it will occur, your astronomy app can help you plan to observe or photograph any eclipse.
(Image: © SkySafari App and NASA)

In 2018, the world will experience three partial solar eclipses and two total lunar eclipses — but whether you can see them depends on where you live. The first event is a total lunar eclipse that happens on the morning of Jan. 31. This eclipse will be special! The moon will be both "super" and "blue," and if skies are clear, skywatchers in North America will be able to see all or part of the eclipse.

On Jan. 31, 2018, skywatchers across much of the world will receive a postholiday gift: the total lunar eclipse of a full supermoon that is also a Blue Moon! Unlike last summer's Great American Total Solar Eclipse, lunar eclipses are completely safe to look at because the sun is below the horizon. Any sunlight that reaches the eclipsed moon has to pass over the Earth's horizon, panting the moon with reddish light — hence the nickname "blood moon" for eclipsed moons.

This total lunar eclipse occurs only 1.2 days after perigee (the moon's closest approach to Earth), so the moon's diameter will appear about 7 percent larger than average, making it a "supermoon." The full moon will also be a Blue Moon — the second full moon to occur within the calendar month. Eclipsed supermoons aren't all that rare, but the total eclipse of a Blue Moon hasn't occurred since March 31, 1866. That's 152 years! Don't let the nickname mislead you, though — the moon won't look blue at all.

The entire eclipse will be visible from northwestern North America, across the Pacific Ocean, and as far as eastern Siberia and Asia. Most of North America will see a portion of the eclipse before the moon sets and morning twilight arrives, while Eastern Europe and Central Asia will see the eclipse already in progress when the moon rises. During totality, when the moon is fully in shadow, the moon's northern limb will pass just south of the center of the Earth's shadow, darkening the moon's northern half more than its southern half.

To find out whether the eclipse will be visible where you live and to preview what it will look like, use an astronomy app such as SkySafari 6, Star Walk 2 or Stellarium Mobile.. Open the app, and then search for and center the moon — don't worry if it's below the horizon for now. Next, set the app's date to Jan. 31, 2018, and the app's time to about 1 a.m. in your local time zone. For locations in North America, the app will show the moon high in the night sky. Zoom in on the display until the moon shows as a good-sized disk.

By running time forward, or by stepping hour by hour, you can watch the moon become eclipsed and then lighten again as it leaves the Earth's shadow. The moon's edge will start to darken at 6:48 a.m. EST (1148 GMT). Maximum eclipse occurs at 8:30 a.m. EST (1330 GMT), and the eclipse ends at 10:11 a.m. EST (1511 GMT). For skywatchers in the eastern United States, the moon will set before maximum eclipse, but you can see the entire eclipse by removing the horizon and turning off daylight using the app's settings.

If you plan to view the actual eclipse, or photograph it, use your app to note the direction and how high above the horizon the moon will be during the event. That way, you can scout out a viewing spot where the moon will be visible throughout the eclipse duration.

Understanding how lunar eclipses work is easy if your app allows you to display the invisible circles representing the full and partial shadows that Earth casts into space. In the SkySafari 6 app, the setting is located under Settings > Solar System > Orbits, Paths & Shadows. Enable the Earth & Moon Shadow Circles, and exit Settings. The smallest circle is the zone, or umbra, where the sun is completely blocked by the Earth. The larger circle is the penumbra, the region where some of the sun is still shining on objects passing through it.

If you flow time forward, you can watch how, during this lunar eclipse, the moon's orbit carries it eastward through the penumbra and umbra, and out the opposite side. During partial lunar eclipses, the moon never fully enters the umbra. [How to Photograph a Total Lunar Eclipse (A Moon Photo Guide)]

A second total lunar eclipse occurs on July 27. This one is only 0.6 days after apogee (the moon's farthest distance from Earth), so the moon's apparent diameter will be near its minimum. The moon will cross just north of the center of Earth's umbral shadow, setting up conditions for a very dark eclipsed moon. At greatest eclipse, the moon will be among the stars of Capricorn, sitting 6 degrees north of Mars, which will be close to maximum brightness. The eclipsed moon will also be positioned within 10 degrees of three deep sky objects, Messiers 75, 72, and 73. They should be visible in binoculars during maximum eclipse.

If you're observing from North America, you will not see any of this eclipse, but you can preview it on your app anytime and then watch the event livestreamed over the internet. The entire eclipse will be visible from Africa, the Middle East, India and western Australia. Observers in eastern Australia and Southeast Asia will see a portion of the eclipse before the moon sets and morning twilight arrives, while for Europe and eastern South America, the eclipse will be already in progress when the moon rises. The partial eclipse begins at 1824 GMT, the greatest eclipse is at 2022 GMT and the partial eclipse ends at 2219 GMT. To use your app, either hide the ground and turn off daylight, or change your app's location settings to somewhere the eclipse is visible. It's fun!

You can safely preview solar eclipses with mobile apps, too. This year's two partial solar eclipses occur on Feb. 15, July 13, and August 11. The first two are best visible from Antarctica, and the third one peaks over the North Pole, so using your app will be much less trouble!

In future editions of Mobile Astronomy, we'll preview more 2018 highlights, including opportunities to see Mercury, the dance of Jupiter's moons and some possible naked-eye comets at year's end. We'll also cover how to measure stars' distances, and some whimsical asterisms — star groupings that are not constellations. Until then, keep looking up!

Editor's note: Chris Vaughan is an astronomy public outreach and education specialist at AstroGeo, a member of the Royal Astronomical Society of Canada, and an operator of the historic 74" (1.88-meter) David Dunlap Observatory telescope. You can reach him via email, and follow him on Twitter @astrogeoguy, as well as on Facebook and Tumblr.