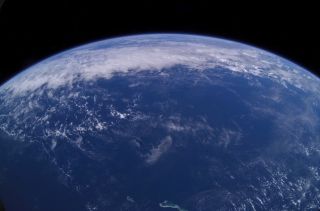 This view of Earth's horizon was taken by an Expedition 7 crewmember onboard the International Space Station on June 13, 2003.
(Image: © NASA)

Could 2,000 years of belief be wrong? Are we in fact living on a disc rather than a globe? One believer from the Flat Earth Society is determined to find out. "Mad" Mike Hughes is all set to build his own rocket to see for himself that the Earth is flat.

For the last 50 years, we've been able to view pictures of the Earth from space, which might seem like all the proof you need to see that our planet is in fact round. But the awareness of how easily images can be doctored and the growth of internet conspiracy theories appears to have fueled a resurgence of belief in a flat Earth.

At the same time, there's a lack of understanding of the science that has long been used to demonstrate that we live on a globe, without the need to leave it. I wish Hughes well with his endeavor, as he has at least been willing to try and prove his theory. Perhaps if more people really could see for themselves the evidence, we might be able to reverse this worrying trend. A good place to start would be by making sure children have the chance to try out simple experiments in school.

One of the best documented methods for determining the Earth's roundness was first performed (to our knowledge) by the ancient Greeks. This was achieved by comparing the shadows of sticks in different locations. When the sun was directly overhead in one place, the stick there cast no shadow. At the same time in a city around 500 miles north, the stick there did cast a shadow.

If the Earth were flat then both sticks should show the same shadow (or lack of) because they would be positioned at the same angle towards the sun. The ancient Greeks found the shadows were different because the Earth was curved and so the sticks were at different angles. They then used the difference in these angles to calculate the circumference of the Earth. They managed to get it to within 10% of the true value – not bad for around 250 B.C.

Another piece of evidence for a globe is the difference between the night skies in the northern and southern hemispheres. The view is completely different because the Earth beneath you is pointing in a different direction. If the Earth were flat, the view should be the same. This can be made even easier by simply comparing when it is night and day in each country.

You can observe the planets as well. They all rotate, and watching over the course of a few days gives a clear picture they are spherical rather than flat. The chance that most of the planets are spherical but the Earth is flat seems very unlikely.

But when science experiments are performed incorrectly they can appear to give the opposite result. If they are shared through social media, these false ideas can be spread quickly with no one to point out their flaws. One common example is the Bedford Level experiment, a form of which was first carried out in 1838 and used to "prove" the Earth was flat for over 30 years before an explanation was found.

This experiment involved placing a marker at a set height at either end of a canal about six miles long. If the Earth is round, then one marker should appear lower than the other when viewed at the same time through a telescope because the furthest marker would have fallen away with the curvature of the Earth. But it was reported that the markers are the same height, suggesting the Earth is actually flat. Modern day Flat Earth theorists still quote this experiment.

The problem is this doesn't take into account the optical effect of the air over the intervening water, which bends or "refracts" the light as it travels from the marker to the telescope and makes it look like they are the same height. The solution is to use multiple markers along the length of the canal which, when observed, all appear to be at different heights.

Perhaps the most impressive experiment that even schools can do today is to send a camera up in a high-altitude balloon. The footage will show that from a high-enough vantage point you can see the curvature of the Earth. This is what Mike Hughes will find if he ever makes his rocket work.

Ultimately, arguing on the internet is not the best way forward for any scientific endeavour. We need to provide the means for people to test these theories themselves and to understand the results they get.

This article was originally published on The Conversation. Read the original article.