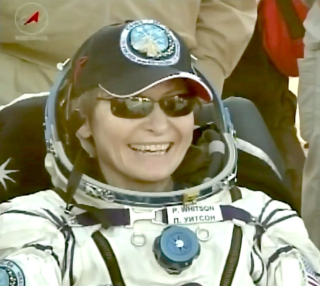 Three space travelers safely returned to Earth from the International Space Station today (Sept. 2) as their Soyuz MS-04 spacecraft touched down on the steppes of Kazakhstan, ending a record-shattering mission for one American crewmember.

NASA's record-breaking astronaut Peggy Whitson returned home on the Soyuz from an extended 288-day mission to the International Space Station (ISS). During her stay, she set a new record for the most cumulative time in space by an American with 665 days accrued. Her crewmates, NASA astronaut Jack Fischer and Russian cosmonaut Fyodor Yurchikhin both spent 136 days aboard the orbiting laboratory. Landing occurred at 9:21 p.m. EDT (0121 Sept. 3 GMT), though it was Sunday morning local time at the touchdown site.

Expedition 51/52 crewmembers Fischer and Yurchikhin arrived at the ISS in April with an empty seat in their Soyuz. Whitson, who arrived in November with Expedition 50/51, filled that empty seat for the return flight after NASA and Russia's space agency Roscosmos agreed to extend her stay through Expedition 52. [In Photos: Record-Breaking Astronaut Peggy Whitson Returns to Earth]

With all three seats filled, the Soyuz MS-04 spacecraft undocked from the space station's Poisk module at 5:58 p.m. EDT (1758 GMT), kicking off the crew's 3-hour and 24-minute journey back to Earth. About three hours later, the Soyuz barreled into Earth's atmosphere traveling at a speed of over 500 mph (800 km/h).

Friction with the atmosphere caused temperatures outside the spacecraft to reach a scorching 2,500 degrees Fahrenheit (1,400 degrees Celsius). A heat shield outside the Soyuz helped keep the crew relatively cool during the plunge. A series of parachutes were deployed to slow the spacecraft down about 15 minutes before touchdown, followed by a last-second burn of six soft-landing engines that helped cushion the last few feet of the fall. [Infographic: Russia's Soyuz Space Capsule Explained]

They successfully touched down on target in a remote area near the town of Dzhezkazgan, Kazakhstan. The Soyuz spacecraft tipped over onto its side, which is common for Soyuz crew landings, NASA TV commentator Rob Navias said during a webcast of the landing.

Recovery teams watched the landing from helicopters nearby before descending to the landing site to help the space travelers out of their capsule. After the crew gets checked out in a medical tent on-site, the helicopters will carry them back to Kazakhstan's Karaganda airport for a traditional welcoming ceremony before they board planes and head home.

While Yurchikhin will go to Russia's cosmonaut center in Moscow, Whitson and Fischer will head to NASA's Johnson Space Center in Houston. After the devastating floods brought by Hurricane Harvey led NASA to close the center, the agency had to come up with a contingency plan for getting the astronauts home.

"Because of the after-effects of Hurricane Harvey, the NASA Gulfstream jet was unable to leave Houston in time to make it to the staging city of Karaganda in order to perform what is called a 'direct return' of the crew back to Houston," Navias said Saturday morning as the crewmembers said farewell to their colleagues in space. [Space Station Photos: Expedition 52 Crew in Orbit]

"The European Space Agency stepped up to the plate and offered the use of its plane that has been to Karaganda before," Navias said. "They will be poised in Karaganda to await the arrival of Whitson and Fischer." The astronauts will then fly back to the European Astronaut Center in Cologne, Germany, where the NASA Gulfstream jet will pick them up and take them back to Houston.

Their return is still scheduled for Sunday night, "just about the same time they would have returned to Houston had the NASA Gulfstream jet done this all by itself," Navias said, adding that none of the science experiments or research samples the crew brought back with them had been impacted.

"Our home is fine, but so many friends and co-workers have been impacted [by the storm]," Whitson said in an interview with NASA. "For example, in order to keep mission control running, the team (three shifts of a skeleton support crew) were sleeping on cots in the backup mission control rooms. Their sacrifices for the station and keeping things running up here are amazing."

After the astronauts return to Houston, they will spend the next 45 days doing physical rehabilitation and undergoing a series of medical tests both for health reasons and scientific research. "There are many investigations on the human body that we've been doing up here in orbit, so we'll have to continue those studies as well during that first 45 days," Whitson said during an in-flight interview with Space.com.

"In addition to that, we're doing a lot of debriefs talking to the ground teams about procedures that worked really well, procedures that we need to try to improve, tools or hardware that we had issues with — just ideas for how to operationally improve the efficiencies up here so that we can get even more done," she said. "So that first 45 days is actually going to be very busy."

Back at the space station, NASA astronaut Randy Bresnik, European Space Agency astronaut Paolo Nespoli and Russian cosmonaut Sergey Ryazansky will be the only three crewmembers on board until Sept. 12, when the Expedition 52/53 crewmembers arrive. NASA astronauts Joe Acaba and Mark Vande Hei and Russian cosmonaut Alexander Misurkin will then dock at the ISS in their Soyuz MS-05 spacecraft and will spend the next six months in space. On Friday (Sept. 1) Yurchikhin handed over command of the ISS to Bresnik.

Yurchikhin has now spent a total of 673 days in space over the course of five flights and is now is now in seventh place on the all-time spaceflight endurance list. He has spent just eight more days in space than Whitson, whose 665 days in space puts her at number eight on that list. She also became NASA's all-time spaceflight duration record holder during this mission when she passed NASA astronaut Jeff Williams' record of 534 days. Whitson's 288-day aboard the station was also the longest single spaceflight by a woman of any nationality. Fischer, a rookie astronaut returning from his first trip to space, has now accrued 136 days in orbit.