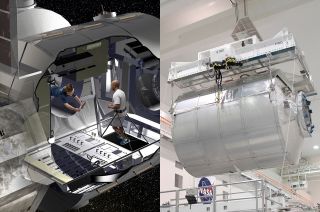 A cargo container that was built to fly on NASA's space shuttles is being repurposed as a prototype for a deep space habitat.

Lockheed Martin announced it will refurbish the Donatello multi-purpose logistics module (MLPM), transforming from it from its original, unrealized role as a supply conveyor for the International Space Station to a test and training model of a living area for astronauts working beyond Earth orbit. The work is being done under a public-private partnership between the aerospace corporation and NASA. [Orion Explained: NASA's Multi-Purpose Crew Vehicle (Infographic)]

"We are excited to work with NASA to repurpose a historic piece of flight hardware," said Bill Pratt, Lockheed Martin's program manager for the deep space habitat contract, in a statement.

Donatello was one of three MPLMs that was designed to fly in the space shuttle payload bay to transfer cargo to the station. Built by the Italian Space Agency under a contract with NASA, two modules, Leonardo and Raffaello, flew on 12 shuttle missions between 2001 and 2011.

In February 2011, Leonardo became a permanent storage module for the station, in part by using insulation that was stripped from the never-flown Donatello.

Lockheed Martin will build its full-scale habitat prototype in the Space Station Processing Facility at NASA's Kennedy Space Center in Florida, where the Donatello module has been located. The MPLM measures 21 feet long by 15 feet in diameter (6.4 by 4.6 meters).

Over an 18-month period, Lockheed Martin will build upon its deep space habitat concept it developed during the first phase of NASA's Next Space Technologies for Exploration Partnerships, or NextSTEP, program by using virtual and augmented reality prototyping in an effort to reduce costs and schedule, as well as identify and address issues while early in the design process. The results, to be shared with the space agency, will help to further understanding of the systems, standards and interfaces needed to make living in deep space possible.

"It is easy to take things for granted when you are living at home, but the recently selected astronauts will face unique challenges," stated Pratt, referring to NASA's 2017 class of astronauts, who may be assigned to deep space missions. "Something as simple as calling your family is completely different when you are outside of low Earth orbit."

"While building this habitat," Pratt continued, "we have to operate in a different mindset that is more akin to long trips to Mars."

The deep space habitat is intended to be part of the Deep Space Gateway, a planned crew-tended spaceport in lunar orbit under development by NASA. In addition to the living module, the gateway, as proposed, includes a power bus, docking capability, an airlock and a propulsion module.

To be launched within he first few missions of the Space Launch System (SLS) heavy-lift rocket, the gateway could also eventually serve as a staging point for a transport for astronaut missions outward into the solar system, or as a staging ground for missions to the lunar surface.

In addition to the deep space habitat prototype, Lockheed will also build a deep space avionics integration laboratory in Houston to demonstrate command and control between the Deep Space Gateway and the Orion spacecraft, also being developed by the company. According to Lockheed Martin, the lab will "help reduce risk associated with critical data interfaces" between gateway elements and "provide an environment for astronauts to train for various mission scenarios."

"Because the Deep Space Gateway would be uninhabited for several months at a time, it has to be rugged, reliable and have the robotic capabilities to operate autonomously. Essentially it is a robotic spacecraft that is well-suited for humans when Orion is present," said Pratt.