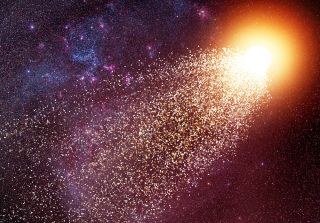 The speediest stars zipping through the Milky Way galaxy are runaways from a small neighboring galaxy, according to a new study.

Scientists said they suspect that around 10,000 of these so-called "hypervelocity" stars in the Milky Way were born in a small satellite galaxy known as the Large Magellanic Cloud. Each of those stars was once half of a binary star system, in which two stars orbit one another. But explosive breakups sent the stars flying away so fast that they escaped the gravitational pull of their home galaxy and ventured off into the Milky Way, the study suggests.

Using data from the Sloan Digital Sky Survey, researchers from the University of Cambridge in the United Kingdom created computer simulations of these swift intergalactic stars, demonstrating how the explosion of one star in a binary can send the other packing fast enough to be ejected from the Large Magellanic Cloud. [Top 10 Star Mysteries]

Only about 20 such stars have been observed directly within the Milky Way, but researchers said they suspect that thousands more have yet to be found. Previously, astronomers thought that these speeding stars were on their way out of the Milky Way after encounters with the supermassive black hole at the center of this galaxy, which has a strong enough gravitational pull to slingshot an orbiting star far, far away at great speeds. And one such intergalactic hypervelocity star appeared to have been ejected by a supernova explosion, according to an older study.

"Earlier explanations for the origin of hypervelocity stars did not satisfy me," Douglas Boubert, a doctoral student at the University of Cambridge's Institute of Astronomy and lead author of the study, said in a statement. "The hypervelocity stars are mostly found in the Leo and Sextans constellations, [and] we wondered why that is the case."

The movement of the Large Magellanic Cloud (LMC) explains the positions of these stars, the researchers suggested. Despite its name, the LMC is much smaller than the Milky Way, which it orbits at a speed of about 900,000 mph (1,440,000 km/h).

"These stars have just jumped from an express train — no wonder they're fast," co-author Rob Izzard, a Rutherford fellow at the Institute of Astronomy, said in the statement. "This also explains their position in the sky, because the fastest runaways are ejected along the orbit of the LMC towards the constellations of Leo and Sextans."

Not only have thousands of these superfast runaway stars escaped the LMC to join the Milky Way, but there are also probably about a million additional runaway neutron stars and even black holes that were flung into the Milky Way, the researchers said.

"We'll know soon enough whether we're right," said Boubert. "The European Space Agency's Gaia satellite will report data on billions of stars next year, and there should be a trail of hypervelocity stars across the sky between the Leo and Sextans constellations in the north and the LMC in the south."

The results were published in the journal Monthly Notices of the Royal Astronomical Society and will be presented today at the National Astronomy Meeting in Hull, England.