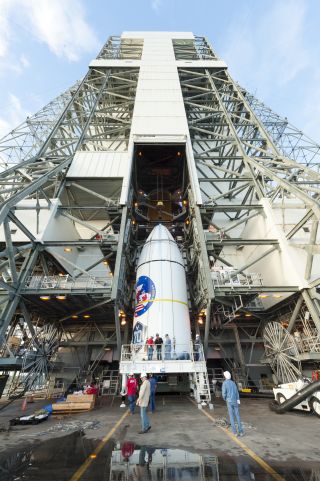 The ninth satellite to join the Wideband Global SATCOM network (WGS-9) is shown here, encapsulated inside a 5-meter (16 feet) payload fairing. The satellite is scheduled be launched into space atop a Delta IV booster from Cape Canaveral's Space Launch Complex 37 on March 18, 2017.
(Image: © United Launch Alliance)

A United Launch Alliance (ULA) Delta IV rocket is scheduled to send a military communications satellite into orbit tonight (March 18). ULA will provide a live stream of the launch, and you can watch it right here on Space.com.

The rocket will carry a $442 million Boeing-built satellite that will join the Wideband Global SATCOM (WGS) network. These satellites provide a worldwide communications network for the U.S. military and its allies. The cost to build the satellite was covered by Canada, Denmark, Luxembourg, the Netherlands and New Zealand, in exchange for access to the entire network, according to Brig. Gen. Wayne Monteith, commander of the 45th Space Wing.  [The Most Dangerous Space Weapons Concepts]

This will be the ninth satellite (WGS-9) to join the network. The WGS-8 satellite was launched in December 2016, and the tenth and final member of the WGS network is scheduled to launch in late 2018.

The mission also will be the 35th launch of the Delta IV since its inaugural launch in 2002, according to a statement from ULA.