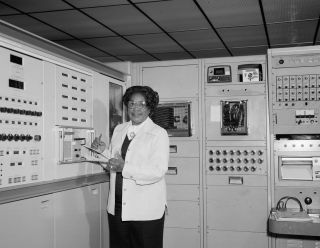 Mary Jackson was one of the "human computers" portrayed in the film "Hidden Figures."
(Image: © NASA)

In the 1960s, Mercury astronauts Alan Shepard, Gus Grissom, John Glenn and others absorbed the accolades of being the first men in space. Behind the scenes, they were supported by hundreds of unheralded NASA workers, including "human computers" who did the calculations for their orbital trajectories. "Hidden Figures," a 2016 book by Margot Lee Shetterly and a movie based on the book, celebrates the contributions of some of those workers.

Beginning in 1935, the National Advisory Committee for Aeronautics (NACA), a precursor of NASA, hired hundreds of women as computers. The job title described someone who performed mathematical equations and calculations by hand, according to a NASA history. The computers worked at the Langley Memorial Aeronautical Laboratory in Virginia.

Human computers were not a new concept. In the late 19th and early 20th century, computers at Harvard University analyzed star photos to learn more about their basic properties. Those computers were women who made discoveries still fundamental to astronomy today. For example, Williamina Fleming is best known for classifying stars based on their temperature, and Annie Jump Cannon developed a stellar classification system still used today (from hottest to coolest stars: O, B, A, F, G, K, M.)

During World War II, the computer pool was expanded. Langley began recruiting African-American women with college degrees to work as computers, according to NASA. However, segregation policies required that these women work in a separate section, called the West Area Computers — although computing sections became more integrated after the first several years.

As the years passed and the center evolved, the West Computers became engineers and electronic computer programmers. The women were the first black managers at Langley and it was their brilliant work that propelled the first American, John Glenn, into orbit in 1962.

Jackson hailed from Hampton, Virginia. She graduated with high marks from high school and received a bachelor of science degree from the Hampton Institute in Mathematics and Physical Science, according to a biography written by Gloria R. Champine for NASA. Jackson began her career as a schoolteacher, and had several other jobs before joining NACA.

As a computer with the all-black West Area Computing section, she was involved with wind tunnels and flight experiments. Her job was to extract the relevant data from experiments and flight tests. She also tried to help other women advance in their career, according to the biography, by advising them on what educational opportunities to pursue.

"She discovered that occasionally it was something as simple as a lack of a couple of courses, or perhaps the location of the individual, or perhaps the assignments given them, and of course, the ever present glass ceiling that most women seemed to encounter," Champine wrote.

After 30 years with NACA and NASA (at which point she was an engineer), Jackson decided to become an equal opportunity specialist to help women and minorities. Although described as a behind-the-scenes sort of worker, she helped many people get promoted or become supervisors. She retired from NASA in 1985. Jackson died on Feb. 11, 2005 at the age of 83.

Johnson showed early brilliance in West Virginia schools by being promoted several years ahead of her age, according to NASA. She attended a high school on the campus of West Virginia State College by age 13, and began attending the college at age 18. After graduating with highest honors, she started work as a schoolteacher in 1937.

Two years later, when the college chose to integrate its graduate schools, Johnson and two male students were offered spots. She quickly enrolled, but left to have children. In 1953, when she was back in the workforce, Johnson joined the West Area Computing section at Langley.

She began her career working with data from flight tests, but her life quickly changed after the Soviet Union launched the first satellite in 1957. For example, some of her math equations were used in a lecture series compendium called Notes on Space Technology. These lectures were given by engineers that later formed the Space Task Group, NACA's section on space travel.

For the Mercury missions, Johnson did trajectory analysis for Shepard's Freedom 7 mission in 1961, and (at John Glenn's request) did the same job for his orbital mission in 1962. Despite Glenn's trajectory being planned by computers, Glenn reportedly wanted Johnson herself to run through the equations to make sure they were safe.

"When asked to name her greatest contribution to space exploration, Katherine Johnson talks about the calculations that helped synch Project Apollo's Lunar Lander with the moon-orbiting Command and Service Module," NASA wrote. "She also worked on the space shuttle and the Earth Resources Satellite, and authored or coauthored 26 research reports."

Vaughan joined the Langley Memorial Aeronautical Laboratory in 1943 after beginning her career as a math teacher in Farmville, Virginia. Her job during World War II was a temporary position, but thanks in part to a new executive order prohibiting discrimination in the defense industry, she was hired on permanently because the laboratory had a wealth of data to process.

Still, the law required that she and her black colleagues needed to work separately from white female computers, and the first supervisors were white. Vaughan became the first black NACA supervisor in 1949 and made sure that her employees received promotions or pay raises if merited.

Segregation was ended in 1958 when NACA became NASA, at which point NASA created an analysis and computation division. Vaughan was an expert programmer in FORTRAN, a prominent computer language of the day, and also contributed to a satellite-launching rocket called Scout (Solid Controlled Orbital Utility Test). She retired from NASA in 1971. Vaughan died on Nov. 10, 2008 at the age of 98.

This article was updated on Feb. 24, 2020 by Space.com reference editor Kimberly Hickok.