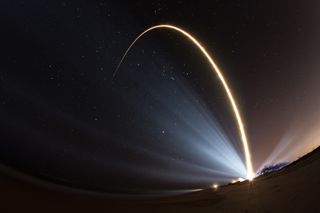 CAPE CANAVERAL, Fla. — A United Launch Alliance Atlas 5 rocket blasted off from Florida today (Jan. 20) to put a missile-detection and early warning satellite into orbit for the U.S. military.

The 19-story-tall rocket bolted off its seaside launch pad here at Cape Canaveral Air Force Station at 7:42 p.m. EST (0042 GMT Saturday), kicking off the first of 11 missions on ULA's 2017 calendar.

Launch was delayed one day after a plane flew into restricted launch airspace during the final minutes of the countdown on Thursday (Jan. 19). Liftoff had already been pushed back into the last minute of the 40-minute launch window to resolve an issue with sensors on the rocket's RD-180 main engine. [Launch Photos: SBIRS Geo-3 Missile-Warning Satellite]

Perched on top of the rocket was the 10,000-lb. (4,536 kilograms) Space Based Infrared System Geosynchronous Earth Orbit satellite, or SBIRS Geo-3, built by Lockheed Martin Corp. in Sunnyvale, Calif.

The satellite is part of a network that provides U.S. military and intelligence communities and their allies with fast, accurate warning of enemy missile launches.

The constellation supplements, and will eventually replace, legacy Defense Support Program satellites that were put into orbit from 1970 to 2007.

"Geo Flight 3 will provide faster and more accurate missile warning to the warfighter, detect dimmer events and shorter missile burns than the ... DSP satellites," Dennis Bythewood, director of the Remote Sensing Systems Directorate at the Air Force's Space and Missile Systems Center in Los Angeles, said in a statement.

"It will also enhance point-of-origin determination and point-of-impact prediction, as well as fulfilling multiple national defense requirements in a common system," he said.

The new satellite, which cost the military about $1.2 billion including the launch, will join two others circling some 22,300 miles (36,000 kilometers) above the planet's equator.

A fourth SBIRS, which will complete the initial constellation, is slated to fly in November. Two additional SBIRS Geo satellites are under construction.

The satellites, which are designed to last at least 12 years, are based on an upgraded, radiation-hardened version of Lockheed's A2100 commercial spacecraft. Their sensor packages consist of two infrared detectors, provided by Northrop Grumman, one of which will continually scan the planet while the other maintains focus on a particular target or region.

"While some satellites can only 'see' what is directly below them, the SBIRS constellation has a view of the whole world, scanning for wide-area surveillance and staring at spots of interest," Lockheed said in a press release.

SBIRS has a four-part mission. "First is missile warning, which provides unmatched, timely global and theater missile launch detection capability for our homeland, our allies and warfighters abroad," Bythewood said.

"Second is missile defense, which allows us to defend against hostile strategic and theater missile threats. Third is battle-space awareness, which bolsters situational awareness for warfighters on the battlefield by exploiting infrared data of terrestrial events in tandem with other data sources.

"The fourth is technical intelligence, which expands our knowledge of current and future capabilities of adversary systems," Bythewood said.

Information collected by SBIRS also is available for civilian purposes, such as firefighting and natural disaster response, Lockheed noted.

Friday's launch was the 116th for ULA, a partnership of Lockheed Martin and Boeing.

Ten more Atlas and Delta rockets are expected to launch this year, including seven more missions for U.S. military and national security agencies, two flights for NASA and one cargo run to the International Space Station for NASA contractor Orbital ATK.