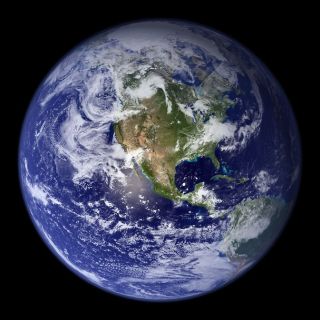 NASA posted this photo of Earth from space to remind U.S. citizens to vote on Election Day.
(Image: © NASA)

The National Aeronautics and Space Administration would like to remind citizens of the U.S. to vote today (Nov. 8).

The agency, which is funded by U.S. taxpayers, published a tweet that features a crisp view of the Earth from space (with North America front and center). The tweet says: "Good morning America! Today's #ElectionDay. Here's a look at our country on this Blue Marble. Remember to go vote today!"

NASA astronauts who happen to be in space on Election Day typically take care of voting via absentee ballot, an option that has been available in Texas (where most astronauts reside) since 1997. The astronauts list their remote address as "low-Earth orbit."

This year, two astronauts took advantage of absentee voting: Kate Rubins and astronaut Shane Kimbrough. Rubins returned to Earth from the International Space Station on Sunday (Nov. 6), but completed her absentee ballot just in case her flight home had been delayed. Kimbrough is currently on the station.