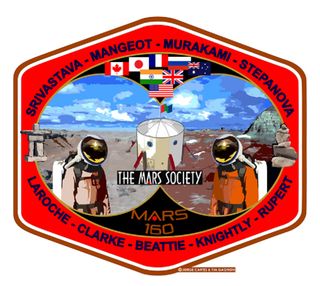 Patch for the Mars Society's Mars 160 mission, during which seven crewmembers will conduct 80-day simulated Red Planet missions in the Utah desert and the Canadian Arctic.
(Image: © The Mars Society)

The first half of an ambitious 160-day-long simulated mission to Mars is getting underway.

Seven people from six different countries are setting up shop today (Sept. 24) at the Mars Desert Research Station (MDRS), a facility in the Utah desert operated by nonprofit group The Mars Society. For the next 80 days, the explorers will conduct a series of experiments and exploration campaigns to hone the skills and strategies that will be needed by real-life Red Planet pioneers in the future. The same crew will then venture to The Mars Society's arctic station in 2017 for another 80-day session to complete the full 160-day mission.

"What we're doing is not an isolation experiment," Mars Society President Robert Zubrin told Space.com, contrasting this Mars 160 mission with other efforts such as Mars500, a Russian-European-Chinese project that kept six crewmembers cooped up inside a Moscow facility for 520 days in 2010 and 2011. [See photos from a 2-week MDRS mission in 2014]

So the MDRS crewmembers will do numerous "Mars walks" in the Utah desert and perform research in a number of areas, including geology, paleontology and microbiology, Zubrin said.

The crew is commanded by Alexandre Mangeot of France. The other six are Japan's Yusuke Murakami; Russian journalist Anastasiya Stepanova; Canadian Claude-Michel Laroche; Australians Jonathan Clarke and Annalea Beattie; and Anushree Srivastava, who hails from India but currently lives in England. Americans Paul Knightly and Shannon Rupert are also part of the core team, though they're not suiting up in Utah.

Tonight, the crew is expected to address the 2016 Mars Society Convention, which is being held in Washington, D.C. this weekend, via a Skype connection beginning at about 7:30 p.m. EDT (2330 GMT). You can watch the event live via The Mars Society's webcast.

The second half of Mars 160 will take place next summer at The Mars Society's Flashline Mars Arctic Research Station (FMARS) in northern Canada. At that time, the same core group of crewmembers will conduct the same research and field campaigns they performed in Utah.

Mars 160 — whose principal investigator is Rupert — should give The Mars Society a better understanding of the Utah desert's suitability as a Red Planet stand-in, Zubrin said. (The Canadian Arctic is more Mars-like, but it's also about 10 times more expensive to conduct missions there than in Utah, he added.)

Mars 160 is a special event for The Mars Society. The nonprofit has conducted numerous missions at MDRS and FMARS over the years, but the vast majority have lasted just a few weeks.

You can follow The Mars Society's Mars 160 mission as it goes on here: http://mars160.marssociety.org.