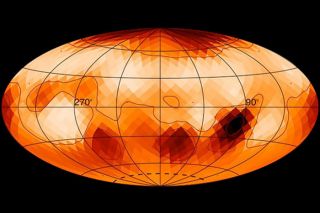 The massive star zeta Andromedae has 15 times the radius of our sun. Therefore our sun could easily fit into one of these dark clusters of starspots as observed by the 6 telescopes in the Centre for High Angular Resolution Astronomy (CHARA) array in California.
(Image: © Rachael Roettenbacher and John Monnier)

Our sun's magnetism waxes and wanes over cycles lasting approximately 11 years, producing a rash of dark sunspots that drift around the sun's equator at "solar maximum" and then all but disappear during "solar minimum." Astronomers have tracked sunspot numbers for centuries, but only now are we beginning to understand what drives them and how the underlying magnetic field is generated.

But as we get up-close and personal with our nearest star, solar physicists are curious as to whether our sun is typical — do other stars exhibit similar cycles? Do they have sunspots or, more accurately, starspots? If so, are they driven by the same mechanisms?

Of course this answer is hard to come by; zooming in on a distant point of light to decipher surface features on other stars, let alone resolve starspots, has been asking a little too much of astronomical techniques. But we are reaching a point where we can see small stars, particularly red dwarfs, exhibiting huge regions, covered with large spots, which cause the star's brightness to dim as they rotate.

Now astronomers have gone one better: they've mapped the photosphere of a large old star 180 light-years away and resolved individual spots as the star rotates. And it looks weird.

But "weird" is a very relative term. Just because other stars behave differently from our sun, it's just as likely that our sun is weird when compared with other stars in the universe. Or perhaps every star is unique in some way; countless physical variables all amounting to a rich and varied stellar family.

And in this particular case, zeta Andromedae, a star 15 times the size of the sun, has starspots dotted all over in an apparently random fashion, even at high latitudes (i.e. near the poles).

This is very different to our sun where the majority of sunspots tend to erupt around the equator and we have a pretty good idea as to why this is. The sun experiences differential rotation, in other words it rotates faster at the equator than it does at the poles. This has a dragging effect on the internal magnetic field, pulling it more around the equator. This is thought to "wind up" the magnetic field, making magnetic field lines pop through the photosphere as coronal loops, creating a rash of darkened regions — sunspots — in an equatorial pattern.

As zeta Andromedae doesn't appear to exhibit this pattern of starspots, astronomers can make an early conclusion: its internal dynamics are somehow different than our sun's differential rotation and solar cycle. This finding may not be such a surprise, however.

Our sun rotates at a leisurely pace of 2 kilometers per second. Zeta Andromedae is spinning at a rate of 40 kilometers per second and has a smaller binary partner. We're likely comparing oranges to apples; both are stars, but they have very different properties influencing the evolution of starspots. But one thing is pretty clear to researchers — this star certainly doesn't have a sun-like magnetic dynamo, revealing just how different another star can be to our own.