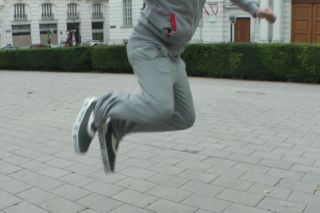 When is the last time a pair of shoes put you over the moon? A New York-based startup wants to send you there, replicating low-gravity environments with their smart, super-magnetic sneakers.

The thick MoonWalker shoes from the startup Moonshine Crea promise to let wearers bounce around like Neil Armstrong. Each shoe contains N45 magnets — a fairly high grade of powerful rare-earth magnet — placed so their north poles face each other, creating a repellent force that “leaves you light on your feet and happy as an astronaut,” according to their Indiegogo campaign.

One MoonWalker version comes with e-ink and smart technology so wearers can customize designs that appear on the sneaker’s edge from their smartphones. They can also connect the shoes to their social media accounts.

Since their crowdfunding campaign launched, the shoes have received 493 percent funding with time left on the clock. Currently the MoonWalkers are going for around $100 on Indiegogo. When they begin shipping later this summer, they’ll come in adult sizes, various colors, and contain memory foam for comfort.

These shoes sound incredibly fun to wear. Sort of like hopping on a pogo stick, only less dorky. But — and this is a big but — I haven’t actually seen the shoes demoed yet. The startup’s main video merely explains the shoe’s components.

“Where can we actually watch a video of the shoes in action?” one Facebook commmenter wrote on their page. “Seeing how they’re built doesn’t show me how they work.” Moonshine Crea did respond that they’re working on new videos to upload this month.

Maybe hoverboards will improve to the point where they go head-to-head against anti-gravity kicks like this. In any case, it’s clear that we’re all itching to get off the ground. The matter of who levitates best will get settled once the shoes launch in August.