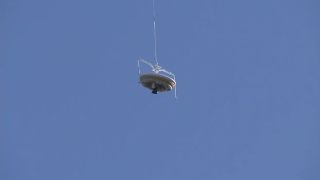 A "flying saucer" that NASA hopes will help astronauts land safely on Mars someday has taken to the skies again.

The balloon-aided liftoff kicked off the second test flight of the LDSD system, which is designed to get superheavy payloads down softly on the surface of Mars. [Test Flight Photos for NASA's 'Flying Saucer']

Such a capability "is really critical for not only future enhanced robotic missions, but [also] human exploration of Mars," Steve Jurczyk, associate administrator of NASA's Space Technology Mission Directorate, said during a prelaunch news conference on June 1.

The 1-ton Curiosity rover is the heaviest object NASA has ever put down on the Red Planet. Curiosity landed in August 2012, pretty much maxing out the capabilities of its rocket-powered "sky crane" and 50-foot-wide (15 meters) parachute.

"Right now, we are kind of at the technological limit of what we can land on Mars in terms of size and weight," Jurczyk said.

"So this new technology is required to land 5 metric tons for human missions, maybe 30 [metric tons] and beyond," he added, referring to the LDSD system.

That system consists of a saucerlike "supersonic inflatable aerodynamic decelerator" (SIAD) and a 100-foot-wide (30 m) supersonic parachute — the biggest such chute ever flown. The SIAD is designed to fit around the rim of an atmospheric entry vehicle, slowing it down by increasing its surface area and thus its drag. NASA engineers are developing two SIAD versions; one is 20 feet (6 m) wide when inflated, and the other measures 26 feet (8 m) across.

The LDSD team has devised a high-altitude test for this gear, taking advantage of the fact that the thin air far above Earth's surface is a good analogue of the Martian atmosphere.

A 400-foot-wide (121 m) balloon lofts the LDSD test vehicle up to an altitude of about 23 miles (37 kilometers) from the Pacific Missile Range Facility. The 7,000-lb. (3,175 kilograms) craft is dropped; it then fires up its onboard rocket engine, which blasts the vehicle to supersonic speeds and a height of 34 miles (55 km) or so.

Then, the SIAD inflates. This maneuver slows the LDSD craft down from about three times the speed of sound (Mach 3) to Mach 2.35 — slow enough, theoretically, for the huge parachute to deploy safely and guide the vehicle down to a soft splashdown in the Pacific Ocean.

The LDSD system's first such flight test was on June 28, 2014. Everything went well that day, until it was time for parachute deployment; the supersonic chute was quickly destroyed, torn apart by the fast-rushing air.

"Now, we've developed a much more robust, stronger parachute they're going to be able to test this time," Adler said during the prelaunch news conference. This second test centers primarily on the new chute, since the SIAD and other aspects of the test vehicle worked well the first time around, he added.

The results of today's test won't be known for a while after liftoff. For example, it will likely take more than 2 hours for the balloon to reach 23 miles in altitude, NASA officials said.

Regardless of the results, today's LDSD trial should prove valuable, Jurczyk said.

"I'm confident, again, we will learn a great deal from the test and gain a lot of knowledge that will shape future tests and future systems to land larger payloads on the surface of Mars," he said. "NASA could be ready for using this technology in future landed Mars missions as early as the 2020s, and it could be especially beneficial for missions like Mars sample-return and for human-exploration precursor missions."

The cost of the LDSD program is about $230 million, Adler said. A third test flight, also planned to launch from Kauai, is tentatively scheduled for next year.

Today's test flight was originally scheduled for June 2, but strong winds and rough seas that could have hampered recovery of the LDSD vehicle delayed the liftoff by nearly a week.