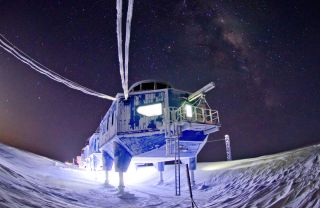 A crew of scientists living in Antarctica will simulate spaceflight during the long, cold winter to better understand how humans adapt to long space voyages.

The Antarctica experiment at Halley Research Station is designed to help researchers understand how well crewmembers remember certain skills during a nine-month mission that somewhat resembles a flight to space. For example, some of the crew will be trained on how to dock a Soyuz spacecraft to the International Space Station before starting the mission.

The mission includes four months of complete darkness and isolation at sea level. People are also being studied at Concordia Research Station, another Antarctic facility that is at a higher altitude of 3,200 meters (10,500 feet). [9 Wildest Mock Space Missions]

"Living at Halley is in many ways similar to living in space where crew are cut off from the world without sunlight and in very small communities," said Nathalie Pattyn, a doctor at Halley, in a statement. "The huge scientific bonus of comparing data from Halley and Concordia is to be able to look at the influence of hypoxia, the lack of oxygen, on top of the isolation and confinement issues."

The Halley station has a crew of between 13 and 52 scientists during the year and can have temperatures as low as minus 58 degrees Fahrenheit (minus 50 degrees Celsius) in the winter.

Other planned experiments include watching the effects of austral summer (where the sun doesn't set). Light will be one of the big themes of this crew's research studies. The effect of light on the human body is examined in terms of body clocks, physical activity and eye adaptation.

Crewmembers will also record video diaries that will later be analyzed by computers to watch for any changes in words or pitch. The aim of that experiment is to better monitor how well the crewmembers are doing psychologically.