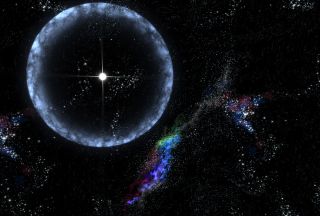 An artist's conception of a magnetar, one of the proposed sources of a fast radio burst.
(Image: © NASA)

For the first time, a burst of radio waves hundreds of millions of times more energetic than the sun was caught red-handed as it slammed into the Earth.

In recent years, astronomers have retroactively spotted a wacky signature in their data: Every now and then, torrents of energy that last a few thousandths of a second wash over Earth. These so-called "fast radio bursts" (brief bursts of radio waves) are currently on the list of unexplained cosmic phenomena.

On May 14, 2014, at 12:14 p.m. EST (1714 GMT), astronomers using the Parkes Radio Telescope in Australia detected a fast radio burst in real time. The astronomers sent out an alert, and within hours, telescopes in the United States, India, Germany and elsewhere were pointed toward the original source. It was the first time astronomers have seen a fast radio burst as it was happening, giving them time to point multiple telescopes in the direction of the signal, scientists report in a new study. [Top 10 Strangest Things in Space]

"These events are one of the biggest mysteries in the universe," John Mulchaey, acting director at Carnegie Observatories and co-author of the new study, said in a statement. "Until now, astronomers were not able to catch one of these events in the act."

The live observation helps narrow down the vast array of phenomena that might cause fast radio bursts. Although the source of these bursts remains a mystery, scientists say it must be huge, cataclysmic and up to 5 billion light-years away. This study sheds light on their exact origins, noting that a top contender is a flare from a magnetar, a neutron star with a magnetic field a million billion times more powerful than Earth's.

Over the past few years, astronomers have discovered a handful of fast radio bursts, each emitting as much energy in 1 millisecond as the sun emits in 10,000 years. Astronomers found the radio bursts long after they had occurred, by sifting through archived data from the 64-meter (210 feet) Parkes radio telescopeand the 305-meter (1,000 feet) Arecibo Observatory in Puerto Rico.

"These bursts were generally discovered weeks or months — or even more than a decade — after they happened," Emily Petroff, a Ph.D. candidate at the Swinburne University of Technology in Melbourne, Australia, and lead author of the new study, said in the same statement.

Astronomers estimate that fast radio bursts might occur 10,000 times a day across the entire sky, so it was only a matter of time before astronomers caught one in the act. By catching a fast radio burst live, astronomers can quickly follow up that observation with other telescopes. And, the more data they have, the more likely astronomers will be able to discover the origins of these wacky signatures.

There are probably 20 to 30 theories about what could cause fast radio bursts, said study co-author Sarah Burke-Spolaor, a postdoctoral researcher at the National Radio Astronomy Observatory in Socorro, New Mexico.

These theories include fairly standard explanations, like supernovas, but there could be more unusual causes, like "cosmic strings snapping and floating black holes," Burke-Spolaor told Space.com. "There are some really zany ideas out there about what could cause these," she said.

Twelve ground- and space-based observatories attempted to locate the May 14 fast radio burst at different wavelengths. None of the telescopes saw any afterglow at all, which Bruke-Spolaor said rules out one candidate for the source of the radio bursts: Type Ia supernovas. These massive explosions occur when a white dwarf, the Earth-size remnant of a low-mass star like our sun, steals too much material from a stellar companion.

The brightness and consistency of Type Ia supernovas are so well established that astronomers have spotted them across the observable universe. But when Petroff and her colleagues didn't see the well-known signature of a Type Ia supernova following the fast radio burst, they knew they could rule out the supernovas as a potential explanation.

The Parkes data on the May 14 fast radio burst revealed a new property of the bursts: The waves appear to be circularly polarized, meaning their electric and magnetic fields rotate continuously as the wave moves, in a corkscrew motion. Such strong circular polarization is rarely observed in astrophysical phenomena.

In fact, the only source that exhibits this behavior is a magnetar. These bizarre objects are neutron stars — massive stars that have died and collapsed, forming hunks of material even denser than white dwarfs — with incredibly strong magnetic fields. Magnetars also unleash powerful flares when the crust of the star cracks, and this could be causing the fast radio bursts, Burke-Spolaor said.

So far, astronomers have only detected magnetars in the Milky Way galaxy. However, if fast radio bursts are indeed caused by magnetars, it would be the first detection of these objects well beyond the Milky Way. But the team isn't convinced yet.

Burke-Spolaor drew a comparison to gamma-ray bursts — extreme explosions of gamma-rays (rather than radio waves), the source of which remained a mystery for decades. But with today's technology, she doesn't expect it will take nearly as long to discover fast radio bursts' origins. "It should be sometime in the next few years, I expect, that we discover a counterpart," she said.

The study was published Feb. 11 in the journal Monthly Notices of the Royal Astronomical Society.