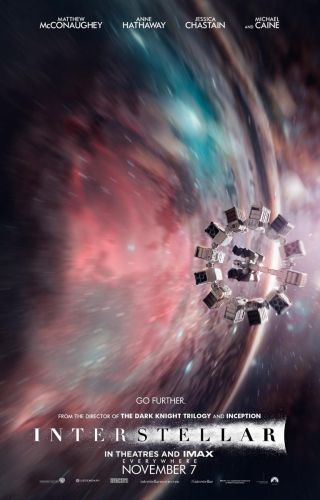 A theatrical poster for the 2014 film "Interstellar" shows the spaceship Endurance flying through a wormhole.
(Image: © Paramount Pictures)

The sci-fi epic "Interstellar" is just a movie, but it throws a lot of science on the screen for space geeks to sink their teeth into.

"Interstellar," which opened in theaters across the United States on Friday (Nov. 7), delves into black holes and wormholes, and it touches down on more than one alien planet. The film apparently takes its science seriously; renowned theoretical physicist Kip Thorne served as an adviser and executive producer on "Interstellar."

Here's a look at some of the space-science concepts that play key roles in the film, which was directed by Christopher Nolan and stars Matthew McConaughey, Anne Hathaway, Jessica Chastain and Michael Caine. Caution: Some spoilers ahead. ['Interstellar': A Space Epic in Pictures]

Journey through a wormhole

"Interstellar" is set at some nebulous point in the not-too-distant future, when global crop failures threaten humanity with extinction. So a small band of explorers, led by a pilot-turned-farmer named Cooper (McConaughey), blasts off to search for an exoplanet that could serve as a new home for the human race.

The astronauts are aided in their quest by a wormhole — a sort of tunnel that allows relatively quick travel between widely separated parts of the universe — which had mysteriously appeared near Saturn some years before. Cooper steers the pioneers' ship, called Endurance, through the wormhole into a planet-rich portion of a faraway galaxy.

Though wormholes are a favored sci-fi trope, nobody knows whether or not they actually exist. According to Einstein's theory of general relativity, they are possible, but no sign of them has ever been spotted.

Furthermore, scientists say, a wormhole would likely collapse quickly unless it was propped open using some kind of negative-energy matter. So the big wormhole in "Interstellar" would require some serious and exotic engineering work — but I'll stop here, so I don't give too much away about the film.

The "Interstellar" visual-effects team used equations provided by Thorne to come up with their representation of the wormhole, depicting its entrance as a shimmering sphere — just as it likely would look in real life, Thorne said.

"Neither wormholes nor black holes have been depicted in any Hollywood movie in the way that they actually would appear," Thorne said recently in an "Interstellar" science video produced by Wired magazine. "This is the first time the depiction began with Einstein's general relativity equations."

Much of the action in "Interstellar" revolves around a giant black hole, which Cooper and his crewmates call "Gargantua." Thorne said he and the visual-effects crew took a great deal of care to depict the light-gobbling monster accurately.

The on-screen result is an exotic object that twists its infalling disk of dust and gas into complex shapes, with the overall effect further complicated by gravitational lensing — a real astronomical phenomenon in which a massive foreground object (such as a black hole) warps the light emitted by stars and other bodies located much farther away. [Images: Black Holes of the Universe]

The collaboration between Thorne and the "Interstellar" visual-effects people was so successful that it will extend into the scientific literature, the physicist said.

"We're going to write several technical papers about this — one aimed at the astrophysics community, and then something for the computer-graphics community — saying, 'Here are some things we've discovered about gravitational lensing by rapidly spinning black holes that we never knew before,'" Thorne said in the Wired video.

In the movie, however, Cooper and his crew  spend some time in close proximity to the black hole, which strains credulity.

The astronauts would likely be killed by the energetic radiation thrown off by the superhot disk of material circling Gargantua, Roberto Trotta, an astrophysicist at Imperial College London, noted in an article for the British newspaper The Guardian. Or they'd be "spaghettified" by the intense gravitional pull, which would be much stronger at one end of their bodies than the other, Trotta added.

And that's not the only issue. The astronauts land on a world that orbits very close to Gargantua — so close that, as the film depicts it, for every hour spent on the exoplanet's surface, seven years elapse on Earth. Such "time dilation" does indeed occur in the presence of gravitational fields, but there's no way it could be so extreme, according to Trotta.

"You would need such a strong gravitational field that you need to be close to what is called the Schwarzschild radius of the object — essentially the event horizon of a black hole," he wrote in The Guardian. (The event horizon is the point beyond which nothing, not even light, can escape a black hole's clutches.) "There is simply no planet that can have this kind of gravity, and if you tried to land on the surface, it would be so strong it would crush you. The numbers simply do not work."

In fact, a planet so close to a black hole could not even exist, Trotta observed: Tidal forces generated by the black hole's immense gravity would tear the planet apart.

Such details will rankle some filmgoers, while other folks won't mind suspending their disbelief. But most people who see "Interstellar" will probably agree that it's a stunning visual spectacle.

One of the alien planets depicted in the film, for example, is a water world featuring mysterious gigantic waves, while another is a frigid realm whose clouds are frozen solid. These worlds are gorgeously rendered, as are the many spaceflight sequences throughout the movie.

The spaceships in "Interstellar" are also nicely conceived and designed. Endurance is a ring-shaped vehicle consisting of 12 boxy modules, some of which can be shuttled to the surface of an exoplanet to set up a base. The mothership carries two heavy-lift "landers" to perform this work, as well as two more-agile "Rangers," which the crew uses for planetary exploration.

And Endurance rotates 5.6 times per minute to generate Earth-equivalent gravity aboard the ship — a detail the sticklers in the audience will doubtless appreciate.