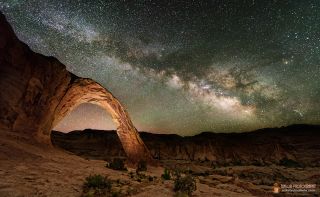 The glimmering Milky Way seems to sit atop the Corona Arch in Utah in this spectacular photo captured by a veteran night sky photographer.

Astrophotographer Mike Taylor took this image on May 27 from Bootlegger Canyon just outside of Moab, Utah.

"There was quite a bit of airglow in the sky this evening," Taylor wrote in an email to Space.com. However, the airglow, which is a weak emission of light by a planet's atmosphere, did not deter Taylor,who also added:"I'm having a blast out in Utah." [Amazing Stargazing Photos of June 2014]

Our host galaxy, the Milky Way, is a barred spiral galaxy seen as a band of light in the night sky. It stretches between 100, 000 and 120,000 light-years in diameter. It is estimated that the galaxy has approximately 400 billion stars. At the center of our galaxy lies a gigantic black hole billions of times the size of the sun.