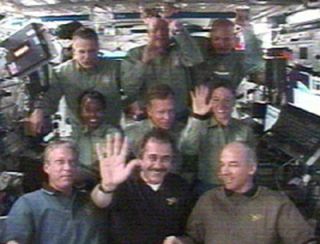 HOUSTON - Nine astronauts are workingthrough a moving day in orbit today as they haul cargo into the InternationalSpace Station (ISS) from the Discovery shuttle and its Leonardomodule.

In a video linkwith reporters here at Johnson Space Center and other NASA centers, the ISSExpedition 13 and STS-121 astronauts said today's cargo transfer dutiesmade for a rather welcome break from the last five busy days of spaceflight.

"We've beenfortunate enough not to have a lot of stuff to trip us up and we've beenstaying on top of it," said STS-121 shuttle pilot MarkKelly. "The transfer is going very well...today has been a relatively lightday compared to the others."

Ceccaccisaid the STS-121 astronauts will go to sleep one hour earlier today, givingthem a 15-hour work day, due to schedule changes following their mission's one-extensionon Friday.

"We'll makesure they're not going to lose any sleep," Ceccacci said.

The sixastronauts who will return to Earth aboard Discovery said their flight is goingwell, though the adaptation to the orbital environment did take some gettingused to for some first-time flyers.

"Well thisis my first flight and the first day, the first 24 hours, I didn't feel sogreat and it took me a while to adapt," said STS-121 LisaNowak, who along with crewmates StephanieWilson and Michael Fossum is making her first orbital flight. "But I'mhappy to say I think I'm completely adapted now."

Shuttlemanagers are expected later today to close out their finalconcerns over Discovery's heat shield, which is a milestone the STS-121crew is eager to hear.

"We'remotivated to know that our vehicle is clean so we can come in and reenter,"Discovery commander StevenLindsey said. "So we'll be happy to hear those words."

In themeantime, Lindsey, his shuttle crew, and the Expedition 13 astronauts Reiter, JeffreyWilliams and PavelVinogradov will forge ahead with their cargo duties while two spacewalkersprepare for their next orbital task in the vacuum of space.

STS-121mission specialists PiersSellers and MichaelFossum, the two spacewalkers aboard Discovery, gave their U.S.-builtspacesuits a checkup today to prepare for a critical repair job outside the ISSMonday. During that spacewalk,the second of three planned for their 13-day flight, the astronauts will restorethe space station's Mobile Transporter - a sort of railcar-mounted crane - to fullhealth to allow future ISS construction.

That Mondayspacewalk will come two days after their firstspacewalk, in which they prepared the Mobile Transporter for repairs andtested shuttle heat shield repairs from the end of a 100-foot (30-meter)combination of Discovery's robotic arm and orbital inspection boom.

"To see asunset and sunrise from the end of the boom, it's just beyond words," Fossumsaid.