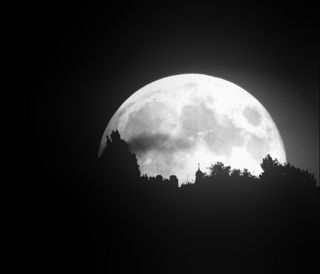 The Year of the Horse begins today with the Chinese New Year, but there's more the moon and its lunar cycle than meets the eye.

From time to time, I get some interesting questions regarding the phases of the moon. Here's a look at those popular lunar questions, and their answers:

How long does a full moon last?

This is a question that surprisingly comes up rather frequently.

The actual moment of full moon — that time when the moon is opposite to the sun in the sky — can be found in any almanac. Some newspapers (like The New York Times) will also provide the time that the moon turns full in addition to the date. We could then say that the moon is officially "full" for only one minute! The full moon of Jan. 15, for instance, occurred at 11:52 p.m. EST. In the very strictest sense, one minute before that time, the phase of the moon was a waxing gibbous; one minute after that time, it was waning gibbous phase. [The Moon: 10 Surprising Facts]

And yet, to most casual observers, the moon might appear to be full for a couple of days before and after the official full moon date!

Surprisingly, the answer is "no!"

The disk of the moon can only appear 100.0 percent sunlit from Earth when it is diametrically opposite to the sun in the sky. But that, of course, is impossible because at that moment the moon would be positioned in the middle of the Earth's shadow and in total lunar eclipse. In fact, in any month where there is no eclipse, there should be an ever-so-slight sliver of darkness visible somewhere on the lunar limb throughout those hours when the moon is passing through "full" phase; close inspection will usually reveal that moon is not fully illuminated, but is indeed gibbous or slightly out of roundness.  [Amazing Total Lunar Eclipse Photos]

So, just how long is the interval during which the full moon seems to appear perfectly round? Or, put another way, just how many hours before or after full moon does it appear slightly less than full?  Moreover, when can this effect first be noted with binoculars or the unaided eye?

In the course of one hour, the moon appears to move eastward against the background stars at roughly its own apparent diameter, or about half a degree. As a consequence, the lunar phase angle – the angle of illumination that the moon makes with the sun — changes, but very slowly. On the moon's surface, this corresponds to only about 10 miles, so the change from a disk that appears fully illuminated, to one that shows a slight out of roundness can be rather subtle.

This test can be made on Valentine's Day, Friday, Feb. 14, when full moon occurs at 23:53 GMT, or 6:53 p.m. EST. For Europeans, the moon will be high in the south-southeast sky. For North Americans, the moon will either have just risen, or moonrise will be, at most, less than a couple of hours away.

When the moon sets about seven hours later for Europeans, will it still appear perfectly round for them, or ever so slightly out of shape? At about that same time the moon will be approaching its highest point in the sky over North America. After about another six or seven hours — or at least a half a day after the time that the moon turned full — the moon will be getting ready to set over North America. By then, persons looking carefully enough with binoculars, should certainly be able to detect a slight, albeit perceptible sliver of darkness (the terminator) along the western/right edge of the moon.

Why is the half-moon referred to as a "quarter moon?"

The term "quarter" moon sounds a bit incongruous to be sure, but the "quarter" in question does not refer to the amount of the moon's disk that is illuminated by the sun, but rather to how far along the moon has progressed through its cycle of phases. The cycle always begins at new moon. The amount of time that it takes to go from one new moon to the next — or the length of time it takes the moon to circle the Earth once, using the sun as the reference point — takes, on average, 29.53 days. This is called a "synodic" month, derived from the word synod, meaning "meeting;" for at new moon, the moon "meets" the sun. If we were to divide that period of 29.53 days into quarters, it would take (on average) 7.38 days to go from one quarter to the next.  [The Full Moon: Why It Happens and What It Means (Video)]

So, using the new moon as the starting point, it would take 7.38 days to complete one quarter of the synodic cycle: the FIRST quarter. It then appears to shine roughly half by day and half by night. It rises about 6 hours later than the sun (one-quarter of a day), at around noontime, and climbs the sky during the afternoon about half a sky (90 degrees or one-quarter of a full circle) away from the sun. It reaches its highest point in the sky at around sunset and shines fir the first half of the night.

After another 7.38 days (or 14.76 days from new moon), our natural satellite would have gone through half a synodic month. Now the moon is opposite to the sun in the sky, with its entire disk more or less fully illuminated. We could call this the "second quarter" moon, but have opted for the "full moon" moniker instead.

Following 7.38 days after full moon (or 22.14 days from new moon) the moon appears half illuminated once again, but now it precedes the arrival of the sun by about six hours, rising around midnight and setting around noontime. Some refer to this as the "third quarter" moon, which it indeed is. Most, however, call this the "last" quarter, which strictly speaking, it isn't. The term "last quarter" should really be reserved for when the moon has completed the final quarter of its synodic cycle. But since this moment also coincides with the beginning of a new synodic month (the next new moon), we have come to associate the moon's third quarter with last quarter.  [Phases of the Moon Explained (Infographic)]

Occasionally, I'll get an email from a reader who says that they are a bit confused. Their local newspaper will say that the moon arrives at a specific phase on a certain date and yet when referring to a specific calendar or almanac, the date of that phase is given for the following day. This happens a few times each year with other phases as well. Why the discrepancy?

Just about all calendar manufacturers and newspapers base the dates of the lunar phases on the calculations of the U.S. Naval Observatory.  Accurate Moon phase data is in fact, available from their Astronomical Applications Department covering the years from 1700 to 2035.

There is one thing, however, that not a few manufacturers and newspapers overlook.  All the dates and times provided by the Naval Observatory are given in "Universal Time" (abbreviated UT) which is sometimes referred to, now colloquially, as "Greenwich Mean Time" (abbreviated GMT). The two terms are often used loosely to refer to time kept on the Greenwich meridian (longitude zero).  As a result, if the times are not converted to your local time zone, you can sometimes end up being one day off on the date of a particular phase. [Moon Master: Take the Lunar Quiz]

In the case of this year's Harvest full moon, the date and time of full moon according to the Naval Observatory is Sept. 9 at 1:38 G.MT. That's why some calendars and newspapers will likely list that full moon as occurring on Sept. 9. But they’re not careful to make the proper conversion for North American time zones.

In this case, for Baltimore, as an example, the Harvest moon will occur at 9:38 p.m. EDT on Sept. 8, since Greenwich Time runs four hours ahead of Eastern Daylight Time. So in Baltimore — and everywhere else in North America — the September full moon occurs before midnight of the previous day.

Just what night is this year's June full moon?

June is the month for proms and weddings and many no doubt have already consulted their calendars to time special events such as these to coincide with that month’s full moon. Most Americans will have a full moon on the evening of June 12. But for those who live in the Eastern time zone, full moon officially occurs at 12:11 a.m. Eastern Daylight Time on June 13.

Since the majority of people who venture outside do so during convenient evening hours, those who gaze skyward on the 12th, will be looking at a moon that will indeed appear very much "full." Most Easterners who consult calendars and local newspapers, however, will see June 13th listed as the night of Full moon. But when they look skyward that evening, they will be looking not at a full moon, but in reality, a waning gibbous moon! The advertised "full moon" will have long since passed and the moon for that night will actually be nearly a full day after the time it turned full and as such, should look noticeably out of shape.

So if you live where Eastern Daylight Time is being observed in the United States (or Atlantic or Newfoundland time in Canada), keep this in mind: If you want your particular function to coincide with a truly "full" moon, schedule it on June 12 not June 13.

That's especially true if you suffer from triskaidekaphobia — the fear of the number 13 — for you see, June 13 is a Friday.