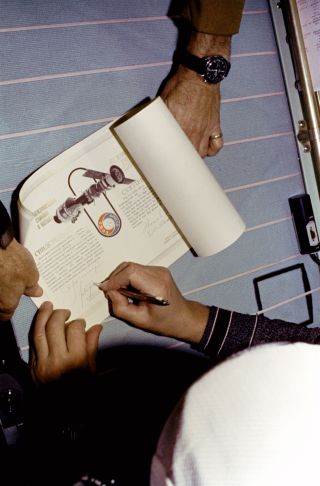 An historical moment is marked with the signing of a certificate on July 17, 1975, the rendezvous day of the Apollo-Soyuz spacecraft.
(Image: © NASA.)

In this historical photo from the U.S. space agency, the hands of Cosmonaut Valerly N. Kubasov are seen as the Apollo Soyuz Test Project (ASTP) engineer adds his name to the signature on the Soviet side of the offical joint certificate marking an historical moment on July 17, 1975, during rendezvous day of the Apollo-Soyuz spacecraft.