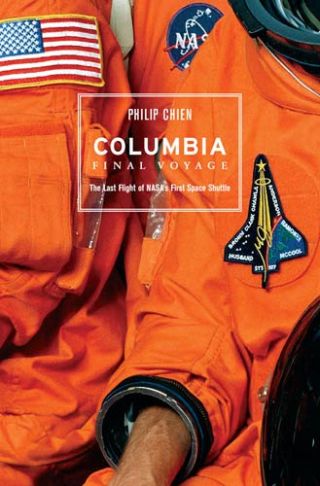 The seven STS-107 astronauts lost during the 2003 Columbia shuttle disaster are the focus of the new book Columbia: Final Voyage.
(Image: © Springer/Chien.)

Chien, who lives on MerrittIsland, watched reporters flock to Kennedy Space Center from all over the worldto watch Columbia launchinto orbit Jan. 16, 2003. Then, he watched the media rush back here and toJohnson Space Center after the orbiter broke up16 days later during re-entry.

Journalists pennedthousands upon thousands of words about the fateful events during Columbia'slaunch, the questionable decision-making in Houston during the flight and thefatal burn-through of the orbiter's heat-shield in the atmosphere.

Chien did not see or readmuch about the personalities of the astronauts or the work they hadaccomplished in orbit. So, Chien decided he would try to tell that storyhimself.

The result is the newlyreleased book, Columbia: Final Voyage, an account that deals sparinglywith the shuttle accident and the details of its investigation but insteadfocuses on the peoplebehind the mission and the legacy of their work.

"The whole object ofthe book is to take the two-dimensional bios and make them intothree-dimensional people," said Chien, who will talk tonight at BrevardCommunity College's Planetarium about the new book and the Columbia mission.

In this case, Chiendetermined the best way to tell the story of the Columbia astronauts and theirmission was to go back over all of the science experiments they were working onduring the 16-day flight.

Chien began cataloging allof the historical data and information he could about the seven members of thecrew and the experiment roster for Columbia's flight.

"This is the legacythat is most important for the astronauts," Chien said. "They gavetheir lives for the science."

The research, when combinedwith interviews with family, colleagues and scientists, results in what may bethe most detailed account that will ever be written about what happened inspace during the mission.

"This is an importantbook on the shuttle," Chien said, because it covers ground not explored byothers post-disaster. "I hope that 20 or 30 years from now, people arestill going to be referring to this book when they talk about themission."

The research and writingtook nearly three years. The book came out Feb. 1, and Chien said he has gottenpositive reviews from astronauts' relatives and others who've read it.

Experiments and recordeddata survived the violent re-entry accident and were recovered by the extensivesearch for debris in Texas.

Still more data had beenbeamed back to Earth during the mission.

There is usable informationfor scientists and papers have appeared in peer-reviewed journals based onresearch performed by the Columbia crew.