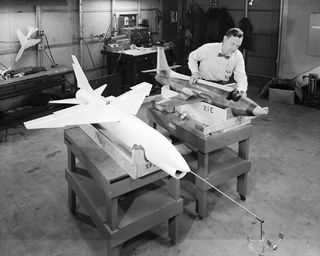 The fastest Navy aircraft in 1957, the Crusader is prepped for air tunnel testing.
(Image: © NACA.)

In this historical photo from the U.S. space agency, a technician prepares dynamic models of the Bell X-1E and the Vought XF-8U Crusader for wind tunnel testing in February of 1957. The Crusader was then the Navy's fastest aircraft (maximum speed Mach 1.75 at 35,000 feet).