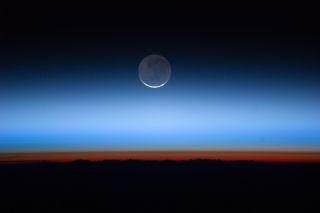 Earth is the only planet in the solar system with an atmosphere that can sustain life. The blanket of gases not only contains the air that we breathe but also protects us from the blasts of heat and radiation emanating from the sun. It warms the planet by day and cools it at night.

Related: How Big is Earth?

According to NASA, the gases in Earth's atmosphere include:

Earth's atmosphere is divided into five main layers: the exosphere, the thermosphere, the mesosphere, the stratosphere and the troposphere. The atmosphere thins out in each higher layer until the gases dissipate in space. There is no distinct boundary between the atmosphere and space, but an imaginary line about 62 miles (100 kilometers) from the surface, called the Karman line, is usually where scientists say atmosphere meets outer space.

The troposphere is the layer closest to Earth's surface. It is 4 to 12 miles (7 to 20 km) thick and contains half of Earth's atmosphere. Air is warmer near the ground and gets colder higher up. Nearly all of the water vapor and dust in the atmosphere are in this layer and that is why clouds are found here.

The stratosphere is the second layer. It starts above the troposphere and ends about 31 miles (50 km) above ground. Ozone is abundant here and it heats the atmosphere while also absorbing harmful radiation from the sun. The air here is very dry, and it is about a thousand times thinner here than it is at sea level. Because of that, this is where jet aircraft and weather balloons fly.

The mesosphere starts at 31 miles (50 km) and extends to 53 miles (85 km) high. The top of the mesosphere, called the mesopause, is the coldest part of Earth's atmosphere, with temperatures averaging about minus 130 degrees F (minus 90 C). This layer is hard to study. Jets and balloons don't go high enough, and satellites and space shuttles orbit too high. Scientists do know that meteors burn up in this layer.

The thermosphere extends from about 56 miles (90 km) to between 310 and 620 miles (500 and 1,000 km). Temperatures can get up to 2,700 degrees F (1,500 C) at this altitude. The thermosphere is considered part of Earth's atmosphere, but air density is so low that most of this layer is what is normally thought of as outer space. In fact, this is where the space shuttles flew and where the International Space Station orbits Earth. This is also the layer where the auroras occur. Charged particles from space collide with atoms and molecules in the thermosphere, exciting them into higher states of energy. The atoms shed this excess energy by emitting photons of light, which we see as the colorful Aurora Borealis and Aurora Australis.

The exosphere, the highest layer, is extremely thin and is where the atmosphere merges into outer space. It is composed of very widely dispersed particles of hydrogen and helium.

Earth is able to support a wide variety of living beings because of its diverse regional climates, which range from extreme cold at the poles to tropical heat at the Equator. Regional climate is often described as the average weather in a place over more than 30 years. A region's climate is often described, for example, as sunny, windy, dry, or humid. These can also describe the weather in a certain place, but while the weather can change in just a few hours, climate changes over a longer span of time.

Earth's global climate is an average of regional climates. The global climate has cooled and warmed throughout history. Today, we are seeing unusually rapid warming. The scientific consensus is that greenhouse gases, which are increasing because of human activities, are trapping heat in the atmosphere.

To better understand the formation and composition of Earth, scientists sometimes compare our planet with Venus and Mars. All three of these planets are rocky in nature and are part of the inner solar system, meaning that they are in between the sun and the asteroid belt.

Venus has an almost fully carbon dioxide atmosphere, with traces of nitrogen and sulfuric acid. The planet, however, also has a runaway greenhouse effect on its surface. Spacecraft have to be heavily reinforced to survive the crushing pressure (90 times heavier than Earth), and the oven-like temperatures (872 Fahrenheit or 467 Celsius), found at its surface. The clouds are also so thick that the surface is invisible in visible light. Because not much sun reaches the surface, this means that Venus has no significant seasonal temperature changes.

Mars also has a mostly carbon dioxide atmosphere, with traces of nitrogen, argon, oxygen, carbon monoxide and some other gases. On this planet, the atmosphere is about 100 times thinner than Earth's — a very different situation from the ancient past, when geological evidence shows that water used to flow on the surface more than 4.5 billion years ago. Scientists suggest that the Martian atmosphere may have thinned over time, either because the sun stripped away the lighter molecules in the atmosphere, or because a huge impact by an asteroid or comet catastrophically stripped the atmosphere. Mars undergoes temperature swings influenced by how much sunlight reaches the surface, which also affects its polar ice caps (another great influence on the atmosphere.)

Scientists routinely compare small, rocky exoplanets to Earth, Venus and Mars to get a better sense of their habitability. The routinely accepted definition of "habitability" is that a planet is close enough to the star for liquid water to exist on its surface. Too far, and the water turns icy; too close, and the water evaporates. However, habitability not only depends on the star-planet distance, but also the planet's atmosphere, the star's variability, and other factors.