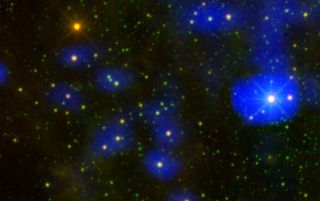 Images from NASA's Wide-field Infrared Survey Explorer reveal an old star in the throes of a fiery outburst, spraying the cosmos with dust in this cool space wall in this cool space wallpaper. Only one other star, called Sakurai's object, has been caught erupting with such large amounts of dust. The process is a natural part of aging for stars like our sun. As they puff up into red giants, they shed dust that is later recycled back into other stars, planets, and in the case of our solar system, living creatures.