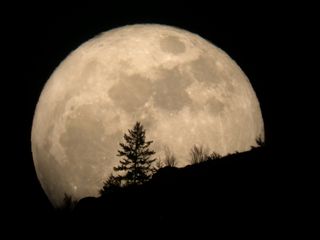 Skywatcher Tim McCord of Entiat, Washington caught this amazing view of the March 19, 2011 full moon - called a supermoon because the moon was at perigee, the closest point to Earth in its orbit - using a camera-equipped telescope.
(Image: © Tim McCord)

Be sure to catch the "supermoon" Saturday evening (May 5) just as it rises in the east around sunset. For reasons still unknown to science, the moon appears much larger and more magnificent when it is near the horizon than when it is soaring overhead, despite the fact that the moon's size never actually changes.

This trick of the brain, known as the "moon illusion," has been observed since ancient times and continues to baffle scientists.

But not everyone thinks clouds have worked their magic on our brains to such a great extent. There are a few alternative hypotheses; one holds that the moon seems bigger near the horizon because we can compare its size to nearby trees and other objects on Earth — and it looms large in comparison. Overhead, amid the vast expanse of outer space, our lone satellite seems diminutive.

Either way, the illusion will work wonders on Saturday's "supermoon," when the full moon coincides with lunar perigee, or the point in the moon's orbit when it swings closest to Earth. "On May 5th, this 'moon illusion' will amplify a full Moon that's extra-big to begin with," NASA stated in a press release. "The swollen orb rising in the east at sunset will seem super indeed."

If you aren't convinced that it's just a brain error, try spanning the moon with your thumb and forefinger when it's hanging low and when it's flying high; the gap between your fingertips won't change.