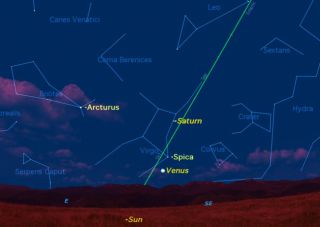 This sky map shows where to look to see the planets Venus and Saturn during the week of Nov. 8, 2010, when they rising before dawn in brilliant splendor.
(Image: © StarryNight Software)

Venus and Saturn, two bright planetary gems of the sky, had been hiding from skywatchers in recent months, but they have returned with flair just ahead of the rising sun.

In the complicated dance of the planets, both planets appear from Earth to have moved west of the sun and both are now "morning stars" in the predawn sky, weather permitting.

This sky map shows where to look to see Venus and Saturn in the early-morning hours.

Even the most avid watchers of the sky probably haven’t seen either of these planets for a couple of months. Both have been hiding close to the sun in our sky, but in very different locations.

Venus passed between the Earth and the sun two weeks ago on Oct. 29, in what is called an "inferior conjunction" with the sun. [Gallery: Spectacular Venus Photos]

The planets rarely align exactly, but Venus was only 6 degrees south of the sun at that time — for all intents and purposes, totally lost in the sun’s glare. For comparison, the width of your fist held at arm's length takes up about 10 degrees of the night sky.

Saturn is a different story. On Oct. 1, it passed almost behind the sun, in what is called a "superior conjunction." It was only 2 degrees north of the sun on that date.

How to see Venus and Saturn

To find Venus and Saturn, go out about half an hour before sunrise any day this week and look a bit south of east.

If your skies are clear, the most obvious thing you will see will be brilliant Venus low on the horizon. Through binoculars or a small telescope, Venus will appear as a tiny slender crescent, since it is still almost completely back-lit by the sun just below the horizon.

About 5 degrees (one binocular field) above Venus is the first-magnitude star Spica in the constellation Virgo. About 12 degrees (two binocular fields) above that is Saturn.

If Saturn looks a bit brighter than when you saw it last, you’re not mistaken. Saturn’s rings, which have been almost edge-on to the Earth for the last two years, are now starting to tilt toward the Earth, and this has a striking effect on the planet's brightness to the naked eye.

If you have access to a small telescope, take a look at Saturn. Its magnificent rings have now opened up so that it looks its old self.

Skywatchers should also look for the moons nearby Saturn. Titan, Saturn's largest moon, is visible in even the smallest telescope, and four more moons can be seen with larger amateur telescopes: Rhea, Dione, Tethys and Iapetus. Use a planetarium program on your computer to identify them.

Both Spica and Saturn are of first-magnitude brightness, but noticeably dimmer than the star Arcturus in the east, and much dimmer than Venus.

Venus and Saturn will grace our morning sky for most of the winter months, but this week is your first chance to welcome them back.