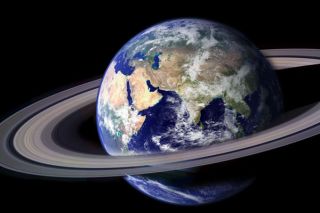 During the new DC Comics Universe series "Flashpoint," in which a time-traveling supervillain alters the past to warp the present, SPACE.com's sister site Life's Little Mysteries presents a 10-part series that examines what would happen if a major event in the history of the universe had gone just slightly different:

What if ... the moon had never formed?

Scientists think material gouged out by a titanic collision between the freshly formed Earth and a Mars-size celestial body some 4.5 billion years ago coalesced to form the moon. [Video: How the Moon Was Made]

Life would be: Migratory and on shorter day-night cycles, if existent at all. Huge tides generated by the moon — which orbited much closer to Earth when it formed — washed the chemical building blocks for life from land into the oceans and helped "stir up the primordial soup," said Neil Comins, a professor of physics at the University of Maine.

The moon's gravity has helped slow Earth's rotation from an initial six-hour day to our current 24-hour day, while also stabilizing the tilt of our planet's axis, and thereby moderating the seasons.

Life forms on a moonless Earth would therefore have different patterns of activity per the short days and nights, Comins told Life's Little Mysteries. These creatures might need to migrate more frequently to cope with extreme climate swings as well.

The absence of the moon would affect life in less profound ways, too: No moon might mean no space race, which probably means no Tempur-Pedic mattresses or freeze-dried ice cream.

Previously: What would life be like if the first animals to crawl out of the sea had six legs instead of four.

This story was provided by Life's Little Mysteries, a sister site of SPACE.com.